Given the warmth of an Indian Summer week, Jodie and I set out this morning for our monthly “road trip” around our backyard, the Big Bend loop from Marathon through Big Bend National Park to the “ghost town” of Terlingua, then through Lajitas, along the River Road up to Presidio, then northward through Marfa, Alpine, and finally back home, a trip of about 275 miles. There’s always something new to see, no matter how many times we make the trip, and this day was no exception.

Passing the old cemetery in Terlingua, Jodie noticed a view of the rock columns marking the entrance to the turn-of-the-last-century graveyard, with the Mesa de Anguilla and some of the old mining ruins in the background:

We planned to lunch at Kathy’s Kosmic Kowboy Barbecue, a “sometimes open, sometimes not” aggregate of mobile eatery and schoolbus just north of Terlingua, but alas, the KKK barbecue is gone…as in, gone. Not a sign of the place. So, we headed off to Lajitas, on the Rio Grande River, the last sign of life for the next 50 miles as the little road follows the Rio Grande River northwest toward the border town of Presidio, TX. About 17 miles out of Lajitas, just past the “Big Hill,” a steep climb that the highway takes to get up and over Colorado Canyon, we find a turnoff and a trail into the land of “hoodoos and balanced rocks.” We’ve passed here dozens of times and never stopped. What a great sight, where the Rio Grande River cuts through an area where rocks and pillars are left precariously perched upon one another, with the river framing the backdrop, and the forbidding outback of Mexico beyond: 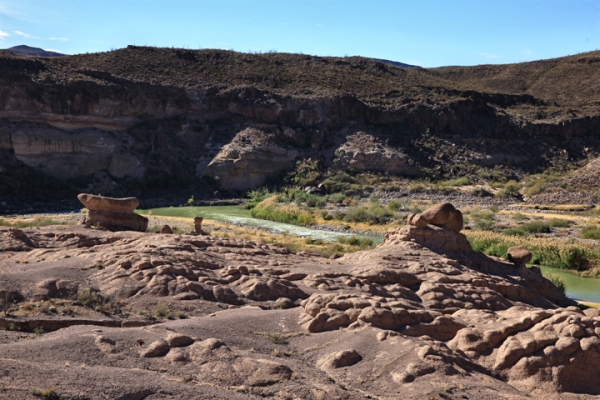 If you find yourself hungry in Presidio, a port-of-entry border town on the Rio Grande, stop by El Patio Mexican restaurant. Noone there speaks english, at least not today, so my attempt at my best Tex-Mex got us a meal ordered and paid for, and out the door with full tummies.  Between Presidio and Marfa, sight of the filming of the famous movie “Giant” in the 1950’s, we pass the remnants of “The Great Texas Camel Experiment.” Yes, camels in Texas: 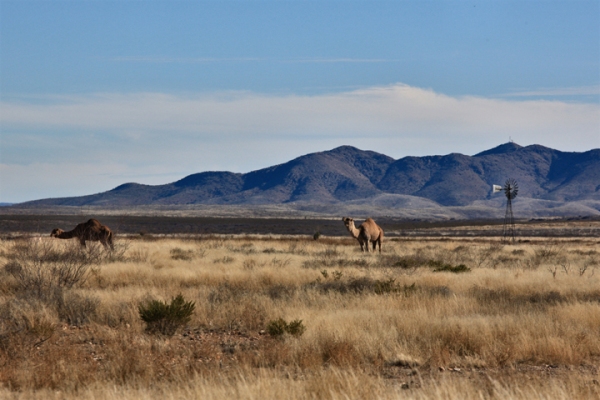 As the story goes,

After his proposal to build a transcontinental railroad along the line of the thirty second parallel had been blocked by sectional politics over slavery in the territories, Secretary of War Jefferson Davis, an experiment to solve the need for transportation across the “Great American Desert” to the new state of California and to the intervening army post, introduced in 1856 and 1857 seventy five camels into Texas. Although many Congressmen considered the camel plan unrealistic and fantastic, an appropriation of thirty thousand dollars had been made for the purpose. After all, were not camels the logical beast of burden with which to cross the desert?

The first of two shipments was landed in Indianola on May 14th 1856, and then was moved to Camp Val Verde, the eastern terminus of the projected camel route, located just south of the preset day Kerrville. Test were begun immediately to determine whether the camels or the tried and true mules pack mules were superior modes of transportation in the Southwest. One test was the reconnaissance expedition of Lieutenant William H. Echols in the summer of 1860 into the perilous Big Bend Country. There were also other trips, some extended as far as California; but with the outbreak of the Civil War the military personnel were recalled from the Texas frontier, and within a few years the abandoned camels had vanished.

And so, add camels to the list of strange critters you just might have to dodge around dusk when driving in this wonderful and strange land. And, oh yes, we nearly hit a very large cow elk (yes, elk) on the highway just west of Marathon on our way home…so busy spotting for red-tail hawks, I didn’t see the 500#, almost camel-sized elk trying to hitch a ride on my bumper.  You just never know.

So, to all our friends sitting out the latest snow and ice storms rolling across our great land, Merry Christmas from sunny, warm (75 degrees) west Texas. Happy New Year y’all.