When the spring temperatures in the Big Bend region start to hit the 90’s by mid-May, it’s time to start thinking about the mountains of New Mexico and southern Colorado. It’s almost spring weather up there, and well within a day’s drive of home. This year, I’m joining my good friend and backpacking partner, Joe, and his daughter and her fiance, for a 6-day backpack trip into the Pecos Wilderness of northern New Mexico. The Pecos Wilderness is within the boundaries of the Carson National Forest, and we access it through Las Vegas, NM. It’s about an 8 hour drive from my home in Marathon, TX. The trailhead has a campground and restroom facilities for last minute attention to detail, then we’re off:

There’s still a lot of snow in the high country, and the runoff from the snow melt is at it’s peak, so stream crossings are not to be taken lightly: 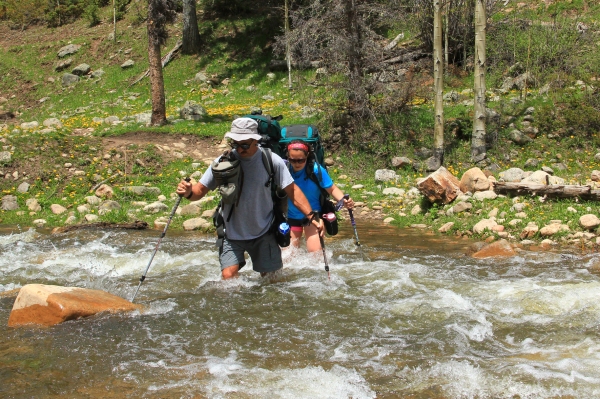 We make about 6 miles our first day, since we got a late start, around noon, and set up camp about 4:00 p.m. Immediately, Joe discovers we’re not alone:

We always travel in bear country with bear-proof containers, and I’m trying out a new lighter, soft bear-proof container called an Ursack, so tonight could be its first test. Our bear has barely had time to move off into the woods, when a small band of elk makes its way out into the evening sun for a snack on the tender, young grass that is ushering forth into the spring sunshine:

The going really gets tougher the second day out. We get above 11,000 feet in altitude, and hit the snow big time! We’re trying to move through a high basin to gain the pass at 12,000 feet, and the conifers up here are holding a late, heavy snowpack that we’ve got to push through. “Post-holing” through snow 4-5 feet deep is the order of the day, and Joe and Eric drop packs and break trail to make the way safer. Even with the trailbreaking, we find ourselves crashing through the snow under the burden of our packs. Fortunately, the only injuries are scrapes and bruises caused by the snow and ice on bare skin. 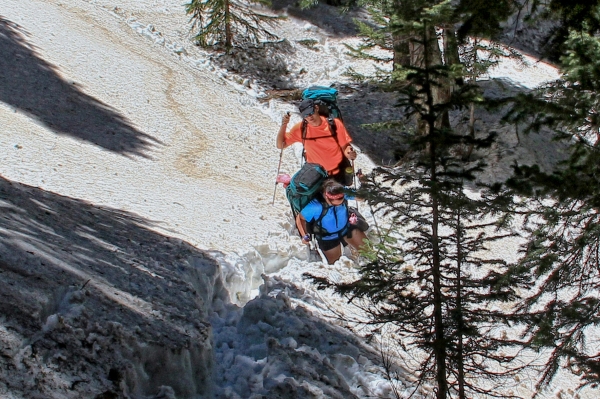 We finally break out of the snow onto the switchbacks that lead to the top of the Santa Barbara Pass, only to be stymied by more snow on the trail. So, it’s straight up through the rocks and scree and loose gravel left behind by this winter’s debris from the snow slides. The snow fields of North Truches Peak looms in the background:

At the end of a very long, wet, tiring day, our socks and boots adorn a spruce tree drying in the sun, like a Christmas tree surrounded with gifts. All that was needed was a star on top:

The next day we planned as a rest day, a day of exploration and discovery, and we were not disappointed. Joe and I took a walk up on the pass, and almost immediately we were greeted by a herd of bighorn sheep, 7 altogether, which came out of the trees above us and followed a game trail right down the Santa Barbara Divide and around the flank of Chimayosos Peak. They came within 50 feet of us, very curious, but not threatened by our presence: 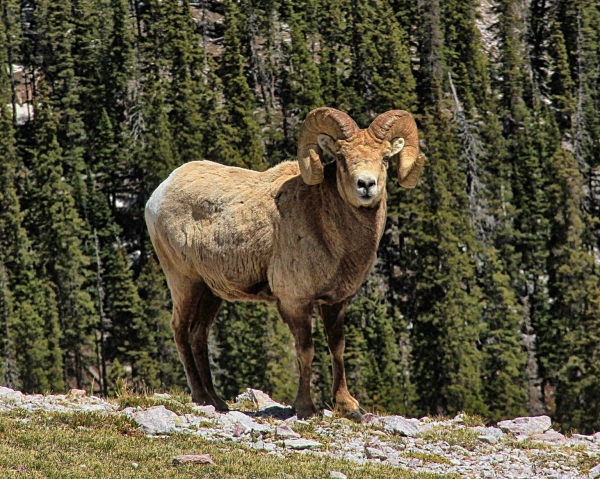 More exploration revealed a small lake, partially frozen yet, at the base of North Truches Peak:

The next morning we break camp and follow the trail across the Divide, staying above 12,000 feet altitude along the wind-swept divide that separates the northern Pecos Wilderness from the southern wilderness. Seen here, the Truches Peaks and Chimayosos Peak:

We finally reach the high point of our route along the Divide, at 12,650 feet, and take shelter behind a rock windbreak, built for protection from the prevailing 60+ mph winds that rake this knob:

After a hike of 6 miles along the rolling Divide, we drop down into the basin of the headwaters of the East Fork of the Santa Barbara River to make camp, and we are treated to a fantastic sunset:

The sunset is followed by a wonderful star show. At first, the eerie glow of a setting moon gives way to a light show of first magnitude featuring the Milky Way. An unexpected visit by the International Space Station (ISS) was the icing on the cake.

The Divide is a windy and barren place, but the views are spectacular. We were visited once again by a small herd of bighorn sheep: 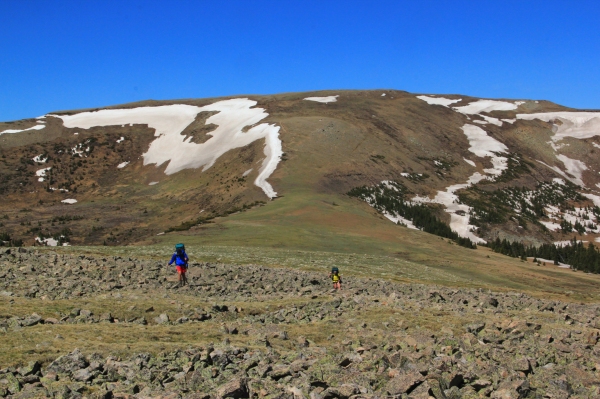 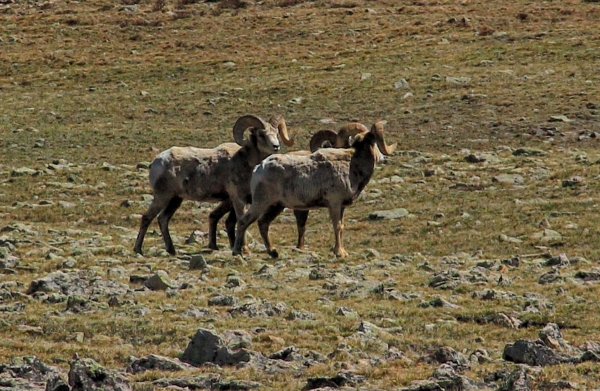 They were curious, but not afraid. They came withing 40-50 feet of us as they made their way along well-established game trails, unaffected by the 50-mph winds:

One of the most disturbing encounters of my backpacking timeline occurred as we trekked across the top of the Divide. We came upon a collection of backpacking items that appeared to have been the remnants of a backpacker’s belongings: a small backpack, jeans, shirts, a makeup case, deodorant, sneakers, a multi-tool, and some other hardware. The scene appeared to have been in place since last fall, as the material appeared to have been under the snow all winter. A search of the area convinced me that this had been a pack dragged here by an animal and chewed on, then left, I felt like this was an unfortunate loss of items to wildlife and not a scene of tragedy. We took photos and left the items intact as we had found them: 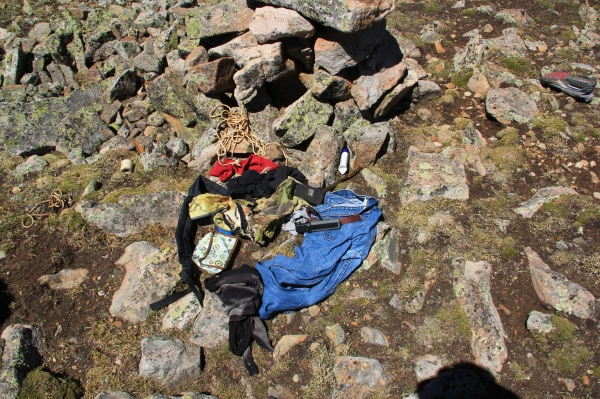 A final look across the top of the Santa Barbara Divide, back toward the Truches Peaks and Chimayosas Peak:

This is our camp among the aspen trees, our last night, surrounded by dandelions and wild iris:

The 7 mile hike to the trailhead ends where it all started:

One thought on “Spring Backpacking in New Mexico”