Last year, Ken, a good friend and former resident of Marathon, TX, suggested that we do a backpack trip…something known as the “Desert Mountain Loop.” This is the most difficult trail in Big Bend National Park, actually a combination of 6 different trails covering 32 miles over 4 days and 3 nights, ranging from an elevation of 4000 feet to over 7000 feet, and passing through several micro-zones of plant and animal environment, from desert to alpine meadow. The main reason this is such a difficult hike is the nearly total lack of water along the route. There are only two dependable springs along the 32 miles, so you must carry a lot of water, 10-15 pounds, plus all your camping and hiking gear. Plus, it is not unusual for temps to hit 90 degrees in February out on the desert, combined with a relentless desert sun. In short, it is deadly. People literally die on this hike each year. It is not for the uninitiated or unprepared, that’s for sure. And so, it only made sense that at age 68, it should be a “Cakewalk.”

Ken is a volunteer ranger in Big Bend National Park, and he spent his first day in uniform to fulfill his duties along the trail:

From the trailhead in “The Basin,” the trail works its way up switchbacks to gain 1300 feet in altitude before cresting at Laguna Meadows:

Here we encounter our first deer, a Del Carmen whitetail buck, a subspecies that only exist here in the Chisos Mountains and in one part of Chihuahua, Mexico:

As you reach the lower elevations of the drainage, you begin to encounter wonderful red “dikes,” igneous intrusions from prehistoric volcanoes that have formed imaginative “hoodoos”:

At the lower end of the canyon is the Homer Wilson ranch, a historic ranch from the turn of the last century, still preserved in the desert:

Our campsite was very comfortable, and we slept under a canopy of brilliant stars, including one “shooting star” captured in this image: 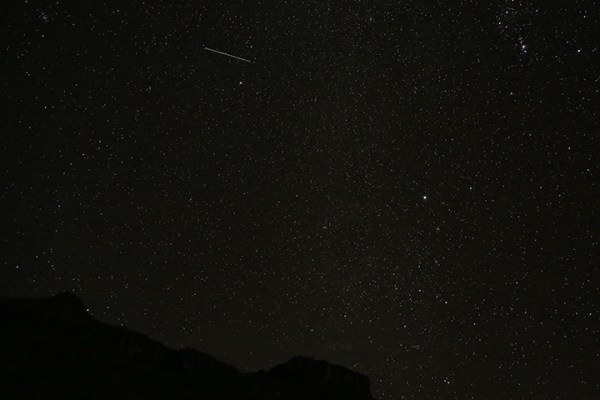 Next morning, the clouds moved in right on cue. It was to make for a perfect day of hiking. Unfortunately, as we prepared for breakfast, a fellow park ranger passed our location on his way to a rescue…a backpacker had sent out a distress signal via a rescue beacon that is monitored by the Air Force, and they were on their way to locate him. Fortunately, he was dehydrated and out of water, but able to walk out and was sent to a nearby hospital for care:

The desert is not flat, and the first obstacle is a 1000 foot climb to a saddle, skirting drainages such as this beautifully colored escarpment:

A look from the saddle reveals “Mule Ears Peak” and the mountains of Mexico beyond, across the Rio Grande River:

Soon, we get our first glimpse of the South Rim of the Chisos, at 7200 feet, overlooking the desert below, our final destination two days from now:

Our source of water in the desert, Fresno Creek, a mere trickle flowing through the narrow channel in the rocks, but nevertheless, lifegiving:

Along the creek, an unlikely resident, the mountain laurel, in all its blooming glory. Hard to explain its presence here in the desert:

On our way to Dodson Ranch we get our first sighting of “Elephant Tusk,” a prominent landmark in the desert. Clouds are forming up and rain is falling nearby:

A wonderful landmark for me, I passed this “gate” 25 years ago, the entrance to the historic Dodson Ranch, another ranch that eeked out an existence here in the desert in the late 1800’s:

The remaining ruins of one of the two ranch houses, here exposing the fireplace and an old iron headboard and footboard of their bed, along with other everyday items, such as pails and cans. When I camped in the ranch house 25 years ago, a little gray fox jumped up into the window of the house, an occurence not repeated on this trip:

After setting up our tents, the clouds began to thicken, and after dinner, a light rain began to fall. If you’ve never smelled the desert after a rain, you must add it to your “bucket list.” There is no sweeter smell in all the world:

The morning greeted us with dense fog, like a heavy, wet blanket: 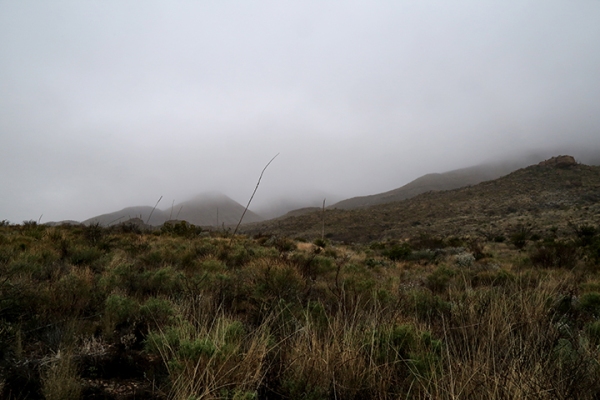 A beautiful example of purple prickly pear cactus, guarded by the ominous lechuguilla:

Pretty typical of the first 6 miles of today’s hike, Ken makes his way along the trail through the fog, really a blessing instead of the 90 degree heat and sun that you usually get out here:

One of the most beautiful and unusual plants we encountered in the desert…I cannot identify it, but I can enjoy its beauty:

The next four hours were spent “slogging” our way up the 3000 foot ascent from the desert floor to the crest of the Chisos Mountains, finally punching through the clouds into bright sunshine and warm temps: 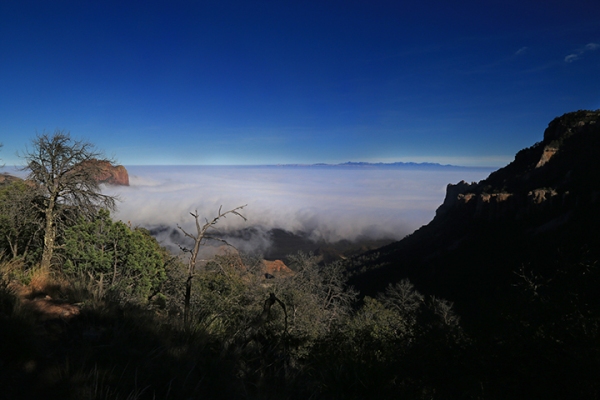 After 8 hours of hiking, we reached our campsite for the night, a designated site atop Juniper Canyon:

Our last morning on the trail, we were visited in camp by two Del Carmen whitetail deer, a doe and a buck: 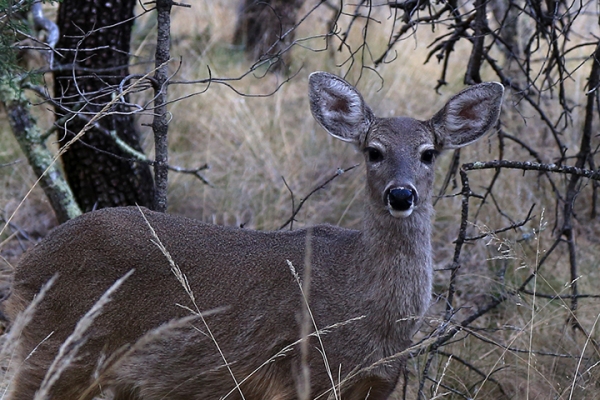 Our final day on the trail was an easy one, joining the Boot Canyon Trail, which is known for its namesake, the “Boot:”

One final look down Juniper Canyon, from whence we came some 3000 feet below: 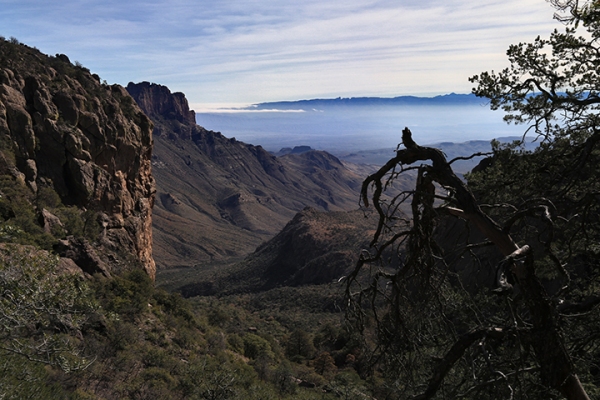 The view from atop the Pinnacles Trail at 7000 feet, looking north from the Chisos Mountains to the country that lies in the northern part of Big Bend National Park:

You cannot do justice to the beauty and extreme wildness of the Chihuahua Desert in pictures. You must get down there and crawl in its dirt to appreciate its majesty. Thanks for taking time to endulge me by pouring through an unusually large number of pictures for this experience.

4 thoughts on “Just a Cakewalk”