It’s July again, and that means time to train for this year’s backpacking trip to the high mountains. That means spending some time on the High Chisos trails in Big Bend National Park. And so, with a break in the weather (afternoon thunderstorms that usually don’t arrive until July and August) I packed up and hit the trail. This spring and early summer has been one of the wettest I’ve seen, so a dry, warm day was a welcome sight.

The trail climbs from the Basin trailhead rather smartly from 5400′ up through a series of swithbacks for 3.1 miles, up to 6700′, and provides great views of “The Window,” which is the main drainage of the entire basin. Beyond lies the lower desert and views to the west: 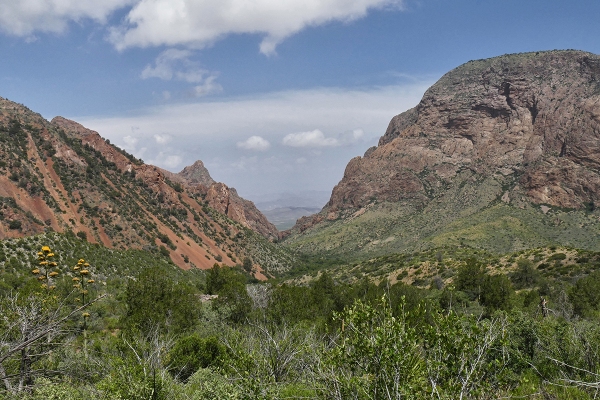 Once on top, the trail levels out through Laguna Meadow for a half mile, before reaching the Blue Creek drainage: 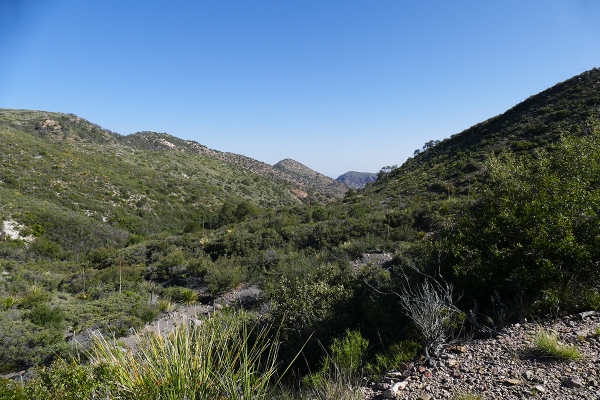 Looking to the southwest down the Blue Creek Canyon, a side trail runs 5.5 miles down to the historic Homer Wilson Ranch, and the Dodson Trail: 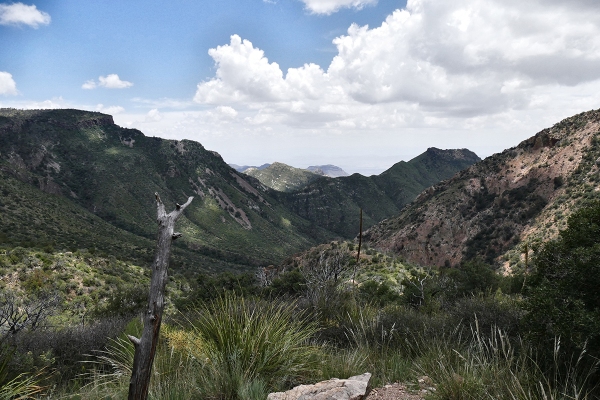 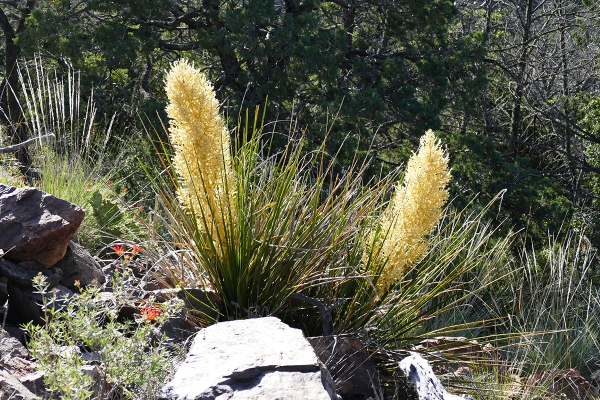 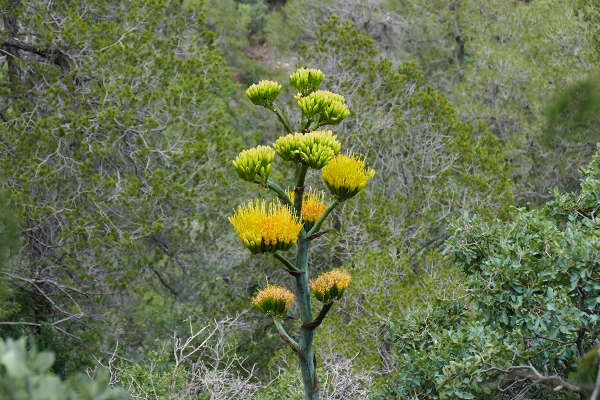 Along the trail a few of the unusual flowers that catch my attention, namely the Heartleaf Goldeneye: 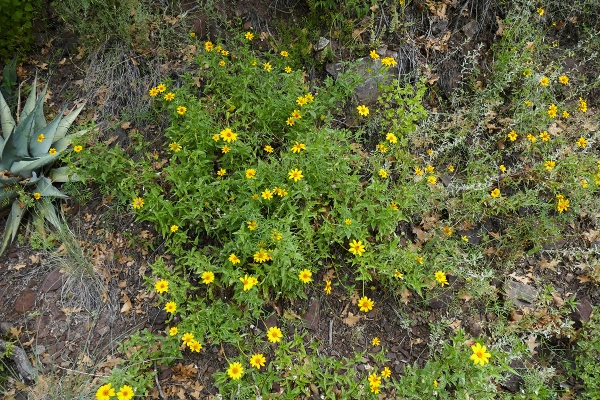 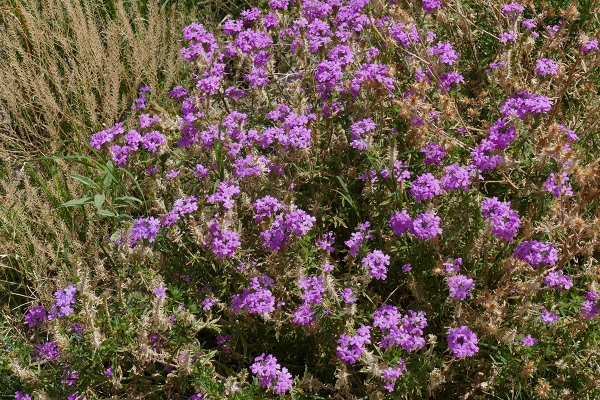 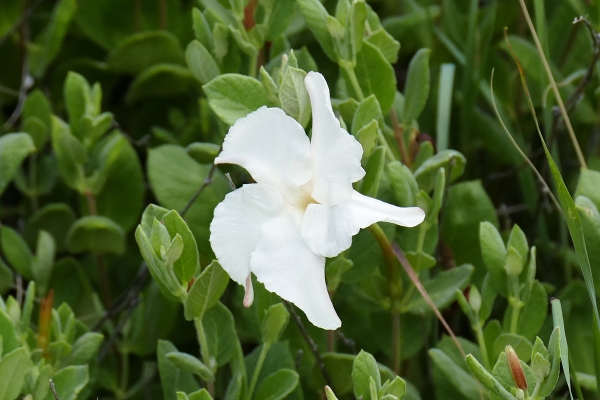 Perhaps the only remaining blooming pricklypear cactus stands guard along the trail in Laguna Meadows, 3 miles from the trailhead, and 1300 feet higher, at an altitude of 6700 feet. 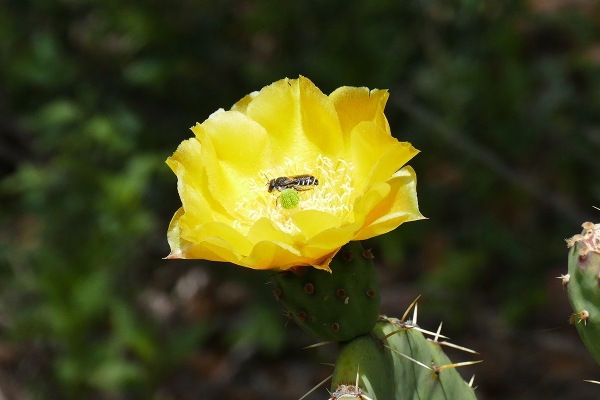 A couple of miles, and another 800 feet higher, I reach my campsite, on the South Rim of the Chisos Mountains, overlooking Mule Ears Peak and Mexico beyond to the south: 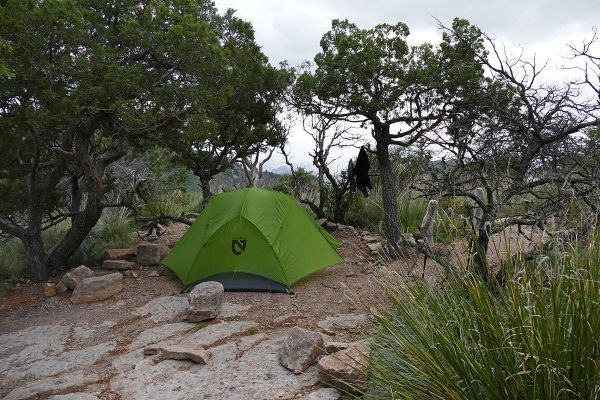 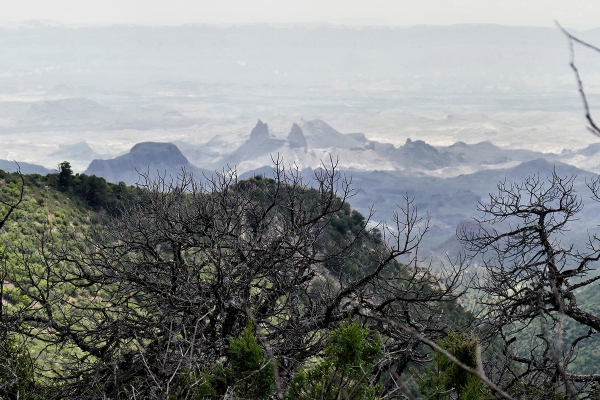 Another half mile down the south rim, the views are spectacular, with a sheer drop of 1500′ down to the desert floor below: 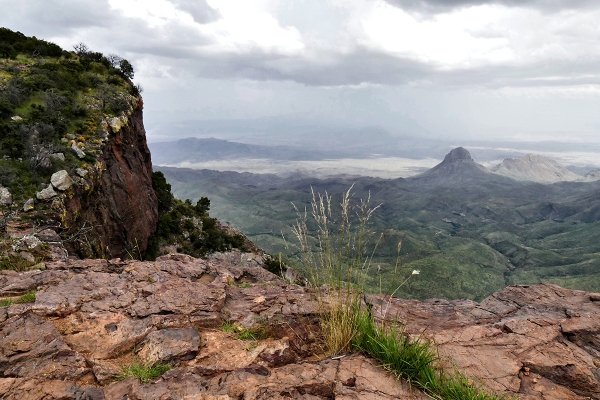 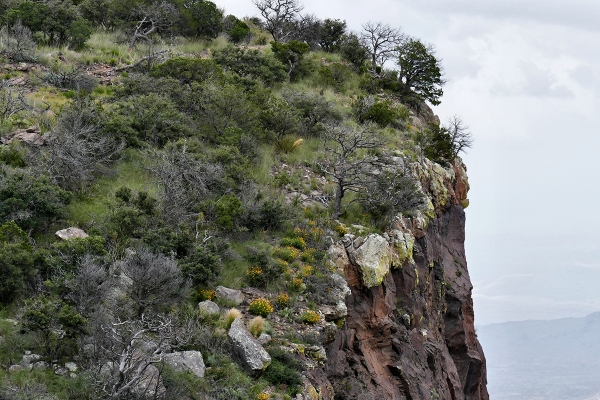 The cliffs along the southeast rim support several nesting pairs of Peregrine Falcons. Just as I turned back toward camp, I was treated to one of the falcons making a hunting run along the edge of the cliffs, flying at a high rate of speed. In a hunting dive, these birds have been clocked at over 200 mph! Yes, I said 200: 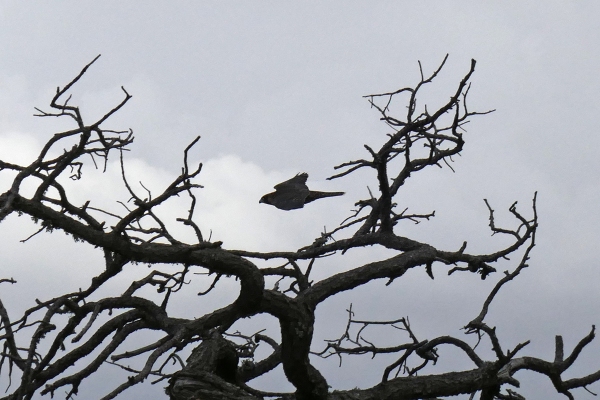 Along the trail back to my tent, I crossed paths with a Del Carmen Whitetail deer, a subspecies of whitetail found only in the Chisos Mountains, and a small pocket in the Sierra del Carmen Mountains in Mexico: 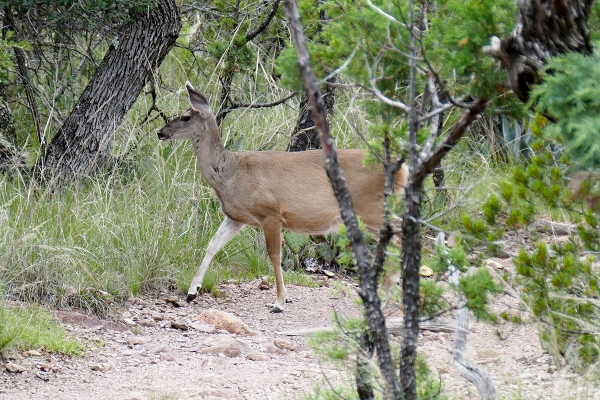 Back at camp, I was treated to the soft chatter of a Blackheaded Grosbeak: 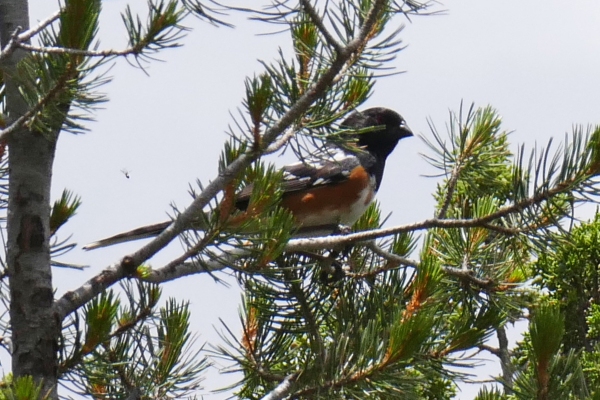 Even before the sun had set, the full moon was rising above the mountaintop trees: 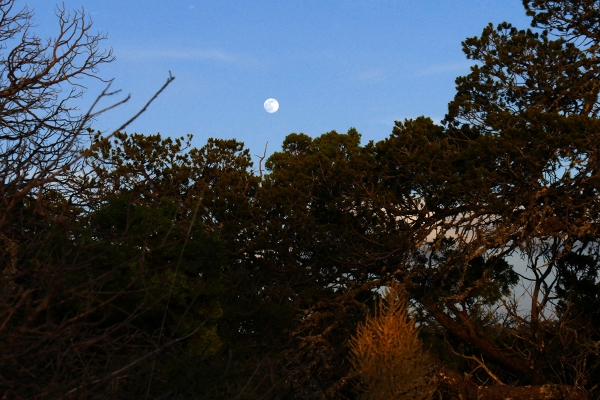 The setting sun set the clouds behind my camp afire with a soft glow: 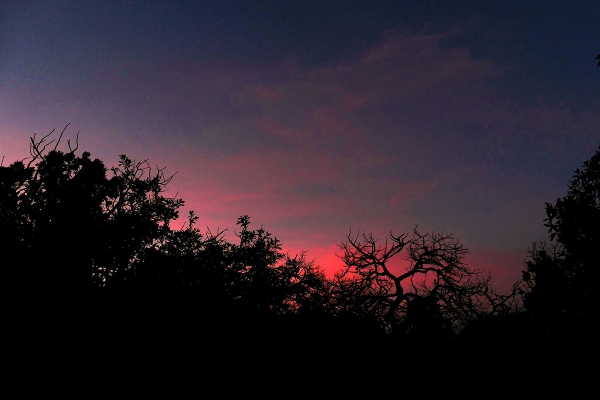 The full moon was spectacular, and provided me with an unrelenting night light that cast deep shadows all around camp: 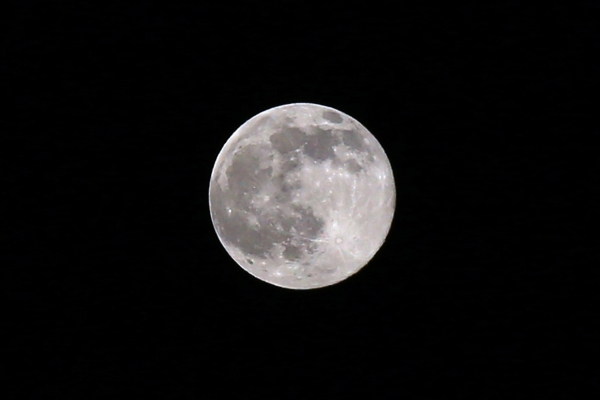 For the past two weeks, we’ve been watching Jupiter and Venus grow closer and closer, until they are within just a few degrees of each other, made spectacular by this view from an altitude of 7200 feet: 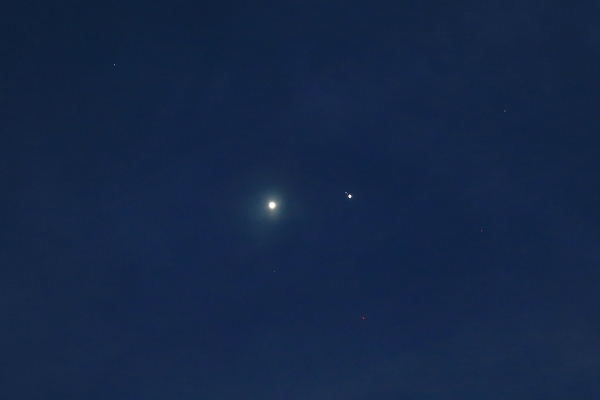 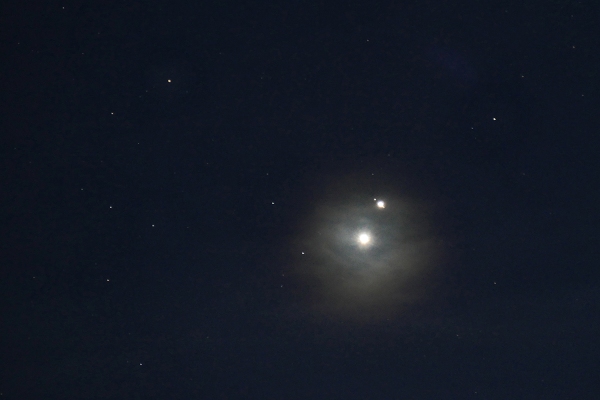 The next morning after breaking camp, I encountered a set of Black Bear prints in the trail, less than a tenth of a mile from my camp. The trekking poles are over 4 feet long, as a matter of reference as to the size of these paws: 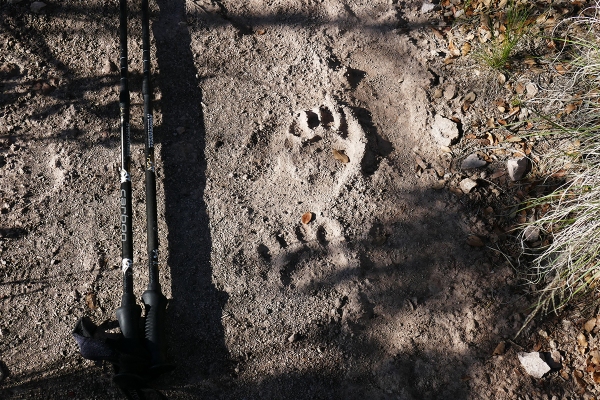 The tall, very large blooms of an agave known as a Century Plant, once believed to bloom at the age of one hundred years, but in fact blooms in at a much shorter age, but only blooms once and then dies: 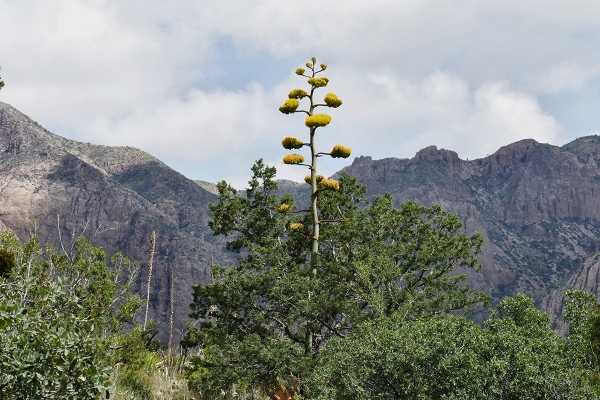 More beauty along the trail back down: 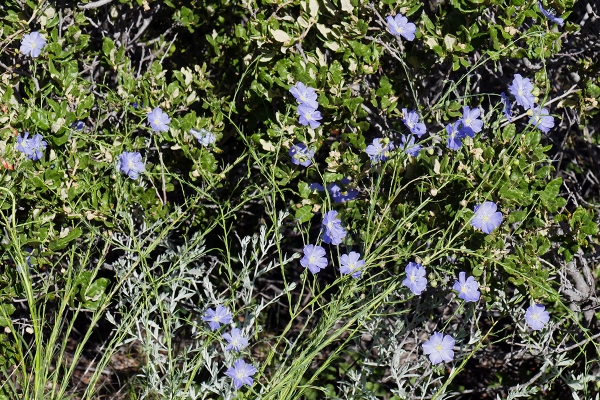 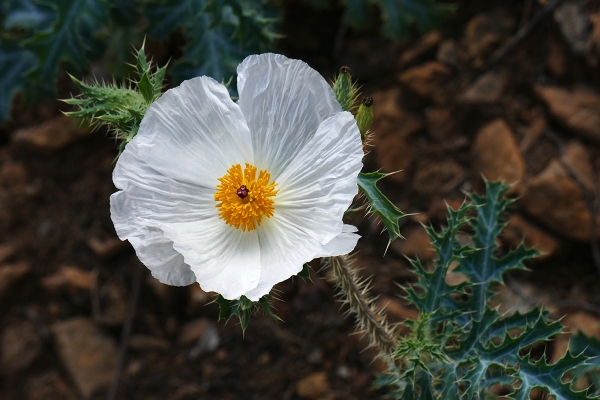 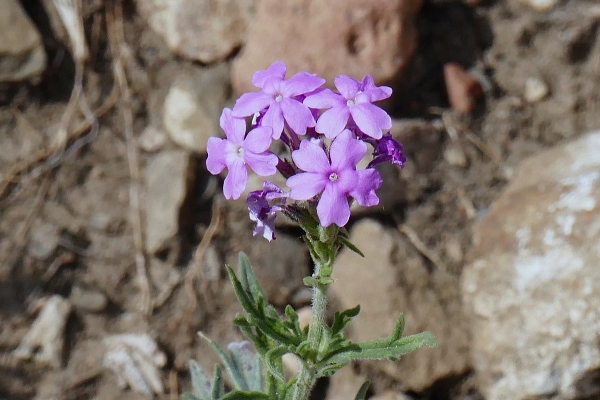 And so, as these two days in the mountains reveal, the magnificent Bloom of ’15 continues into the summer with no less thrilling candy for the eyes.

6 thoughts on “Back on the Mountain”