An area that has intrigued me since I first learned of it from a lady in Taos, NM, who had once been a guide there, is a large tract in southern Utah called the Grand Staircase – Escalante National Monument. It sits at an elevation largely between 5500 and 10,000 feet, so early May is just becoming spring there at most elevations. That means cold nights and cool/warm days, with some lingering snow at higher elevations. It also means fewer tourists, so what better time to join our long-time friends David and Marcia, now residents of southern California, for a couple of weeks of Jeepin’ and ‘splorin’.

For this trip we decided to go with vacation rental homes rather than camping, and use them as “base camp” to explore a variety of geological and scenic wonders found withing a couple of hours’ drive. We chose Hatch, Utah, and Boulder, Utah, for our base camps, and lined up 4 days in each location to give us time to explore unhurried.

First, we had to get there, so Jodie and I gave ourselves three days and two nights to poke our noses into adventures along the way. Our first stop was in Silver City, NM, where we lived for 6 years from 1994 to 2000. We had to stop by our old house, then took a drive up to the little mining community of Pinos Altos.

Our home, which had also been our photography studio for 6 years:

Leaving Silver City, we headed into northern Arizona. As a kid of perhaps 5, my mom and I hopped in our new 1950 Buick Special and headed off down Route 66 to California. Along the way we did the usual touristy things that you did in the 50’s, which included stops at all those “Indian Trading Posts” for Indian spears made of cane shafts and cardboard spear heads, adorned with red-and-blue feathers, and marked “authentic.” The stop at Petrified Forest/Painted Desert National Park was just for Mom. I had to relive my childhood, so we made it a point to stop there on the way. It was amazing, with fossilized logs from the Triassic Period lying everywhere: 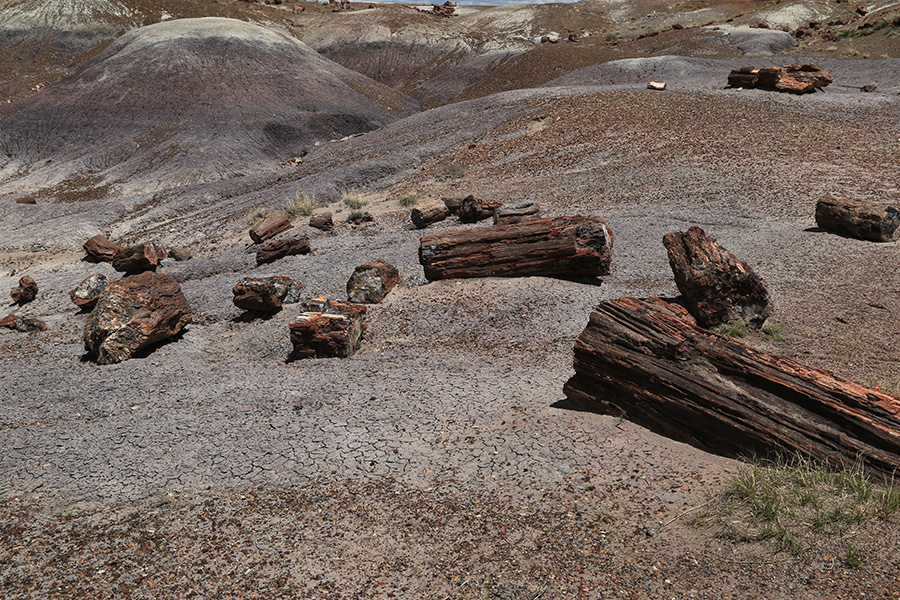 This area was home to many early pre-history Americans, starting about 8000 BC. They left behind many puzzling inscriptions on the rocks:

Just across the old roadway which was once Route 66 is the sister park, Painted Desert NP, with its colorful banded layers of Triassic sediments, originally named by the Spanish explorer Coronado:

Leaving Painted Desert and Petrified Forest NP, it’s only a short drive down I-40 to Winslow, AZ, location immortalized in the Eagles song “Take it Easy,” written by Jackson Browne and Glenn Frey. You’ll remember the lyrics,
“Well, I’m a-standin’ on a corner in Winslow, Arizona
Such a fine sight to see
It’s a girl, my Lord, in a flat-bed Ford
Slowin’ down to take a look at me”

On a corner in downtown Winslow, AZ, is a statue of Jackson Browne, standin’ on the corner, with the girl in the flatbed Ford reflected in the window:

We next found ourselves in the small southern Utah town of Hatch, where we met David & Marcia, long-time friends and companions on many past adventures. After checking into the vacation home we were sharing, we headed off to Zion National Park:

Zion National Park – upon exiting a long tunnel and rounding one of the switchbacks that drop visitors down to the valley floor. where we came upon a young bighorn sheep at home on the rocks in the valley.

Zion NP – a wild turkey struts his stuff while parading after a pair of hens. David and I left the tram, which takes visitors into the heart of the park, and hiked along the road for a mile or so. 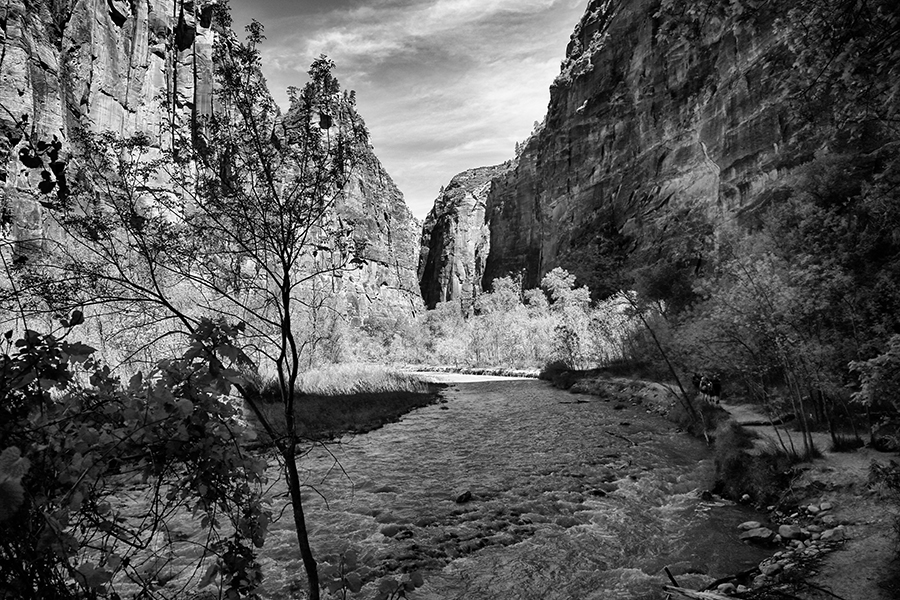 From Zion, we headed across Hwy 12 on our way back to Hatch, and found plenty of leftover winter snow at the higher elevations:

Near Hatch, UT, is the Grand Staircase – Excalante National Monument. Found within the huge area of hoodoos and cliffs is the Kodachrome Basin State Park, with its colorful formations and unusual sculptures: 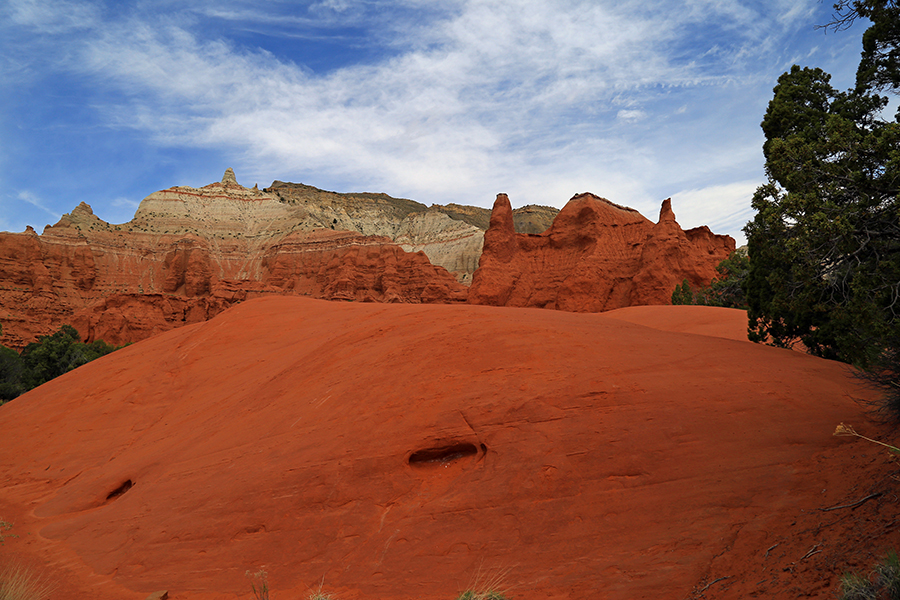 A 3-mile hike along easy terrain takes you back to Shakespeare Arch, well worth the hike. David stands at the base of the formation for perspective:

Grand Staircase – Escalante National Monument – a drive of about 8 miles from Kodachrome Basin SP brings you to Grosvenor Arch. This is ADA accessible via a paved walk from the parking lot. Jodie & I were here in 1993, and it’s a spectacular arch. 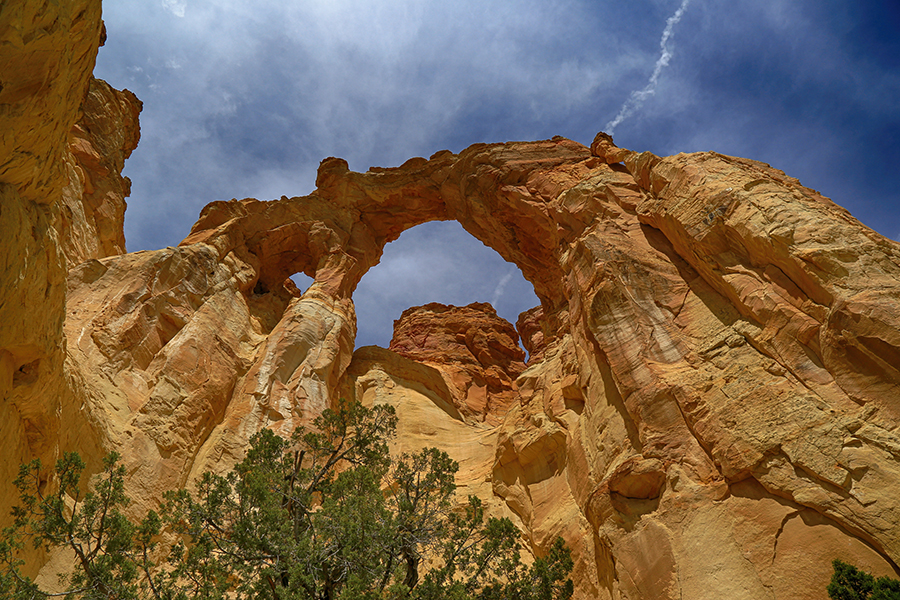 Reagle – on the way back we spotted this rare “Reagle” – with rabbit legs and an eagle body, these hybrids are rarely seen. (Actually, this young golden eagle had just pounced on a rabbit and was flying off with it in his talons, making this optical illusion).

Willis Creek Slots – another side road in Grand Staircase – Escalante National Monument takes you to a trailhead for the Willis Creek slots, a series (5-6-7 depending on how you count) of slot canyons along a small creek. 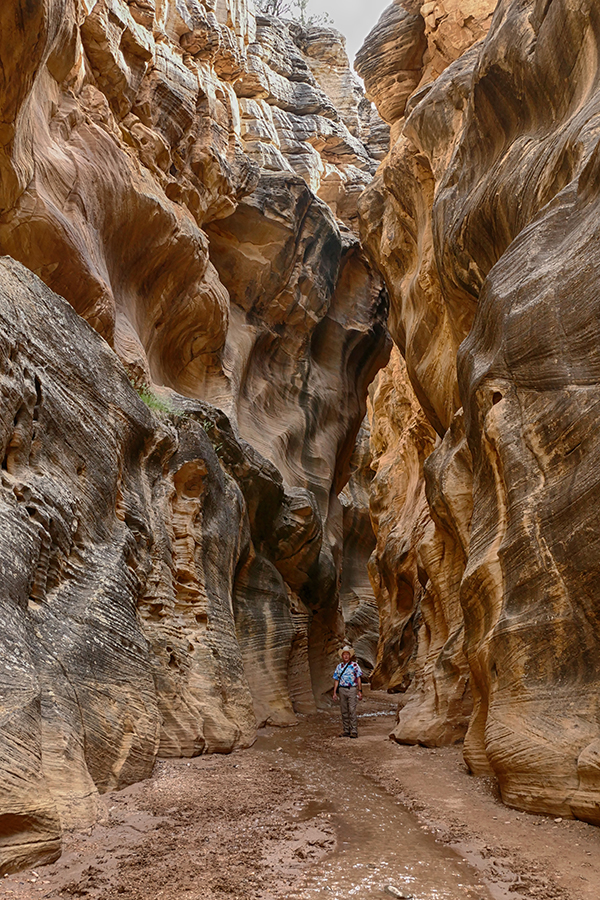 Red Canyon Hoodoos – on Hwy 12 after leaving Hatch, UT, going east, the road climbs through a canyon of the same formations as Bryce Canyon, a park we visited in this area in 1993 but chose to pass on this trip.

Burr Trail Road – a road from Boulder, UT, called the Burr Trail, winds through 30 miles of high desert, then drops down a series of switchbacks to the lower end of Capitol Reef National Park, where it joins with the Notom-Bullfrog Road (impassable in wet weather) and heads north another 44 miles to join the main road through Capitol Reef NP. Notice the arch in the excarpment, visible as we descend the road. 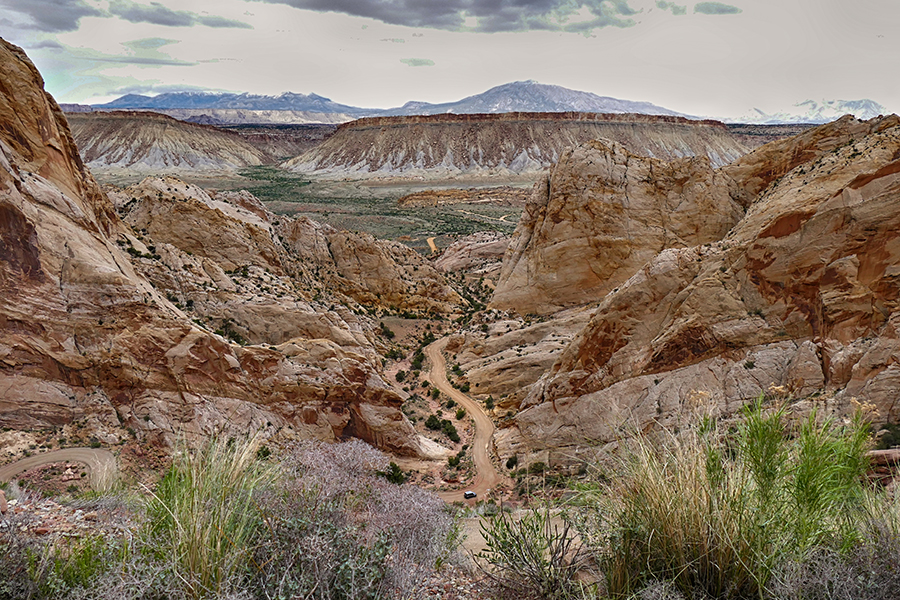 South of Boulder, on the road to Escalante, is another hike in the Grand Staircase – Escalante National Monument to Lower Calf Creek Falls. Here, the 6.3-mile trail follows Calf Creek through a beautiful canyon. 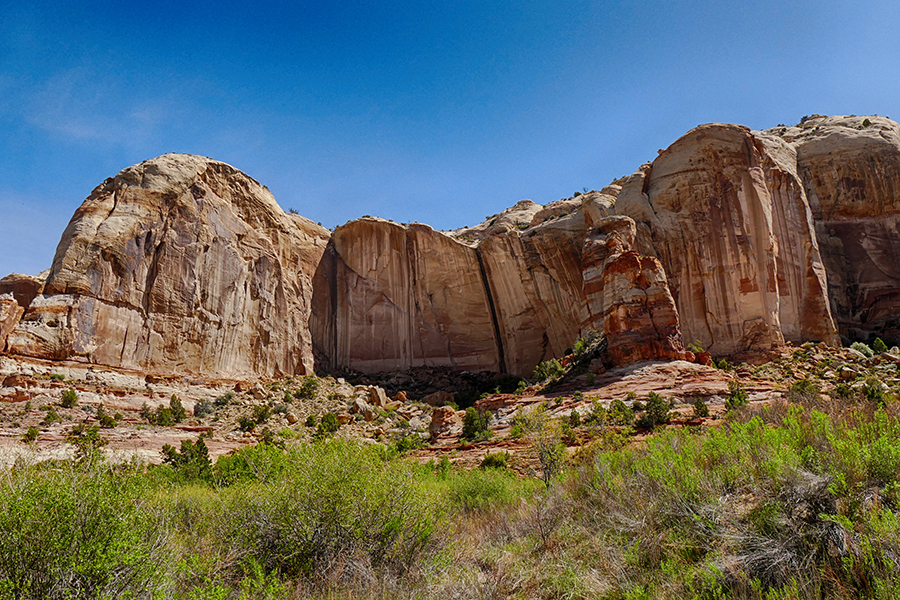 Up on one cliff face are painted these pictographs, seen here from the other side of the valley, standing perhaps 6 feet tall.

The trail ends at Lower Calf Creek Falls. These falls drop 126′ into a clear pool. The temperature in this dead-end box canyon dropped at least 10 degrees as we approached the pool/falls from the cold water.

Capitol Reef National Park lies 60 miles north of Boulder, UT, via scenic Hwy 12. It is not a large park, but has some features that make it worth the trip, such as Capitol Dome:

Capitol Reef NP – petroglyphs carved into the rock walls along the Fremont River:

Capitol Reef NP – a 1-mile hike starting along the Fremont River leads to Hickman Bridge. Definition: an arch spans dirt, a bridge spans water…saw no water here, but they still call it a bridge. 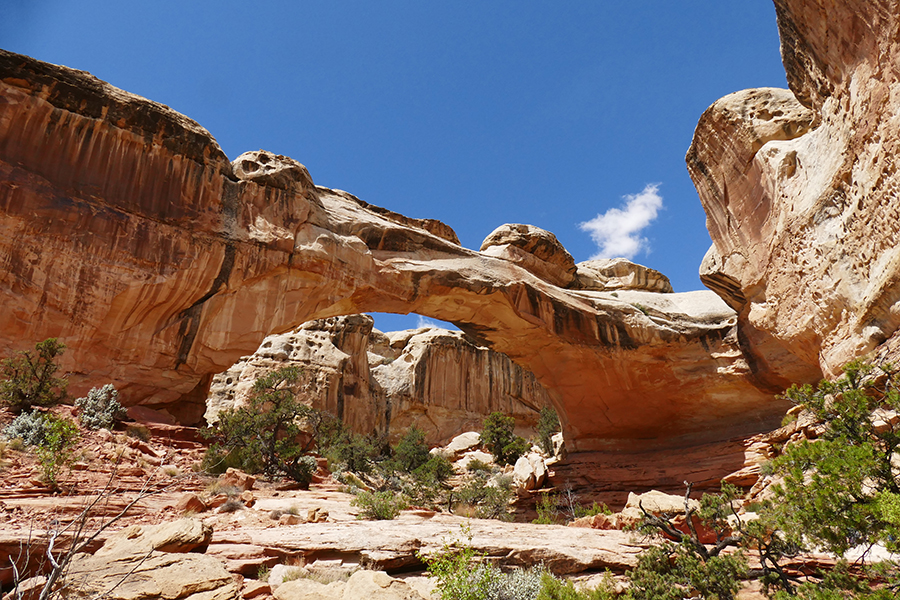 Capitol Reef NP – David leads out down the road through Grand Wash: 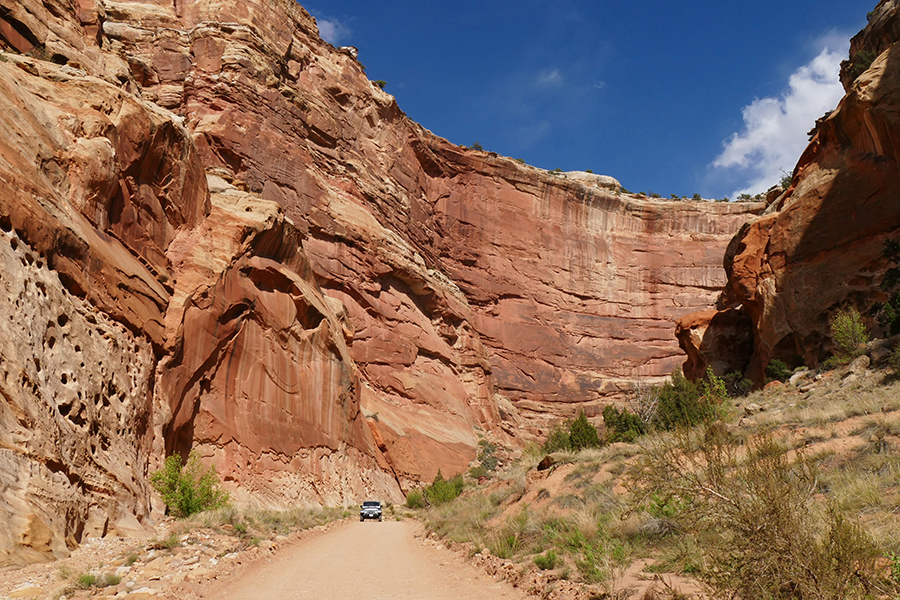 The Devil’s Backbone Bridge – there is a backcountry road that connects Boulder with Escalante, which climbs over the mountains along a 38-mile drive. near the northern end is a bridge built by the CCC (Civilian Conservation Corps) in 1934, “just because they could.”

“Top of the World” view from the Devil’s Backbone:

On the way back to Big Bend through southern Utah, through Grand Staircase – Escalante, through Glen Canyon Rec. Area…sights like this one are reminiscent of an Indiana Jones temple, but seem commonplace in this region of red and gray mesas: 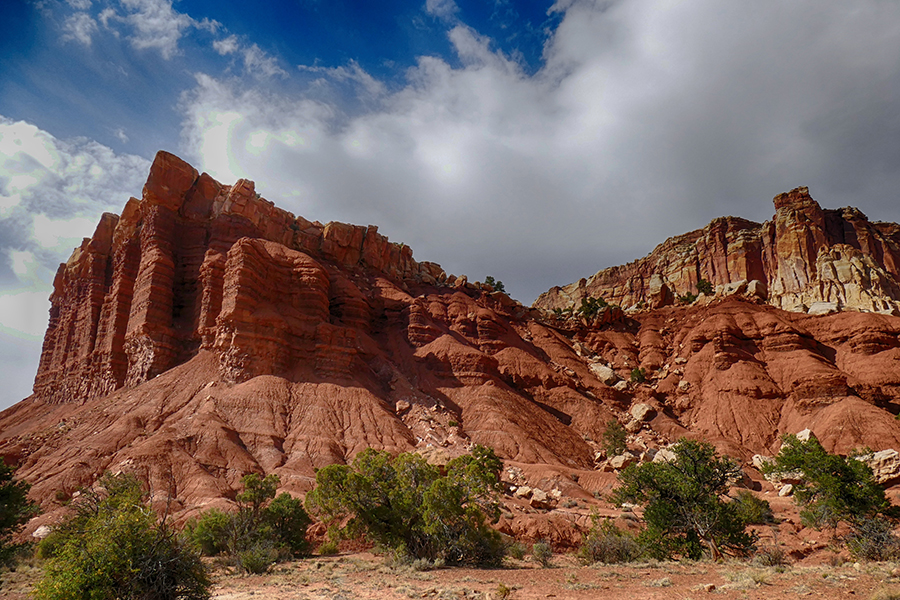 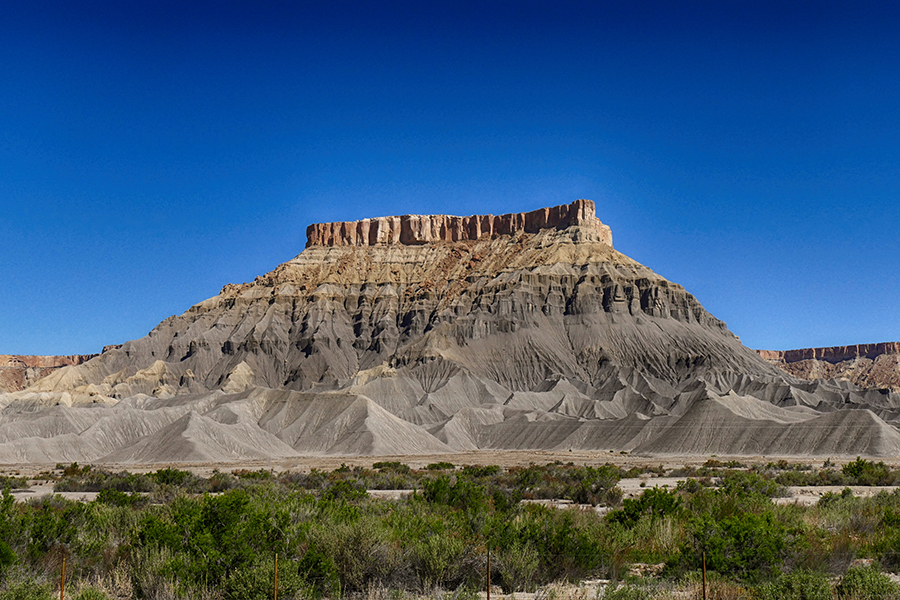 And so, after 12 days in this incredible land we realize that we didn’t even scratch the surface. You need a lifetime of exploration to get to know this land. A lady we knew some 20 years ago back in Taos, NM, had been a guide in the Excalante her entire life, and said she had not seen it all. Guess I’ll just have to save that for another lifetime.

2 thoughts on “Up the Grand Staircase”