This past weekend, Jodie & I hooked the camper to the Jeep and headed down to our favorite backyard location, Big Bend National Park. Our goal for this trip was to drive the Glenn Springs Road/Black Gap Road/River Road backcountry roads in our Jeep Rubicon, which we have not yet done in this vehicle (after trading in our 2003 Jeep over a year ago, the last vehicle to travel these roads). The main purpose of this post is not to document the entire trip, but to share some interesting photos and history of one portion of the route, primarily around Glenn Springs.

Glenn Springs Road leaves the pavement about 6 miles southeast of Panther Junction Visitor Center. We camped in Pine Canyon, a side road which heads north about 3 miles down GSR. Our campsite is nice, overlooking the Sierra del Carmen Mountains which lie across the Rio Grande River in Mexico, and rise to a height of 8,000 feet:

The Chisos Mountains, seen from the north, are greener than I can ever remember them before. Near-record rainfall in August and September has done wonders for the wildlife and the vegetation, and a normally brown desert at the end of summer is now really looking healthy and green:

Immediately, we are aware of the proliferation of butterflies everywhere. Everywhere there is a blooming desert plant, there are butterflies enjoying the richness of the pollen and nectar of the blooms: 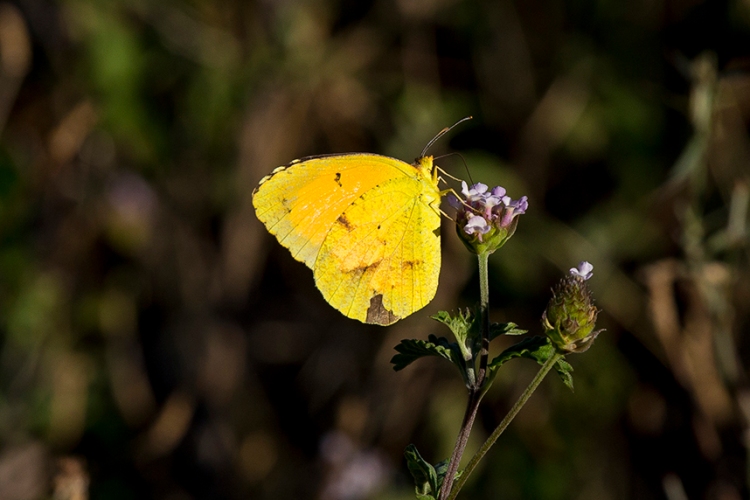 As evening falls, in the afterglow of twilight, we watch as Venus begins to set along a silhouetted skyline which features Elephant Tusk Peak in the distance, a landmark for early inhabitants and settlers in this part of the Big Bend region of Texas:

After dark, the skies are ablaze with the Milky Way, here featuring a setting Venus just above the horizon around 9:00 p.m.

Next morning, we load the Rubicon and head south on Glenn Sprints Road, toward the namesake spring and the remains of the little settlement called Glenn Spring. The large cottonwood tree marks the location of the spring, source of dependable water, or “liquid gold,” a necessity for Native Americans, and later white settlers, along  a trail heavily used by many in past centuries: 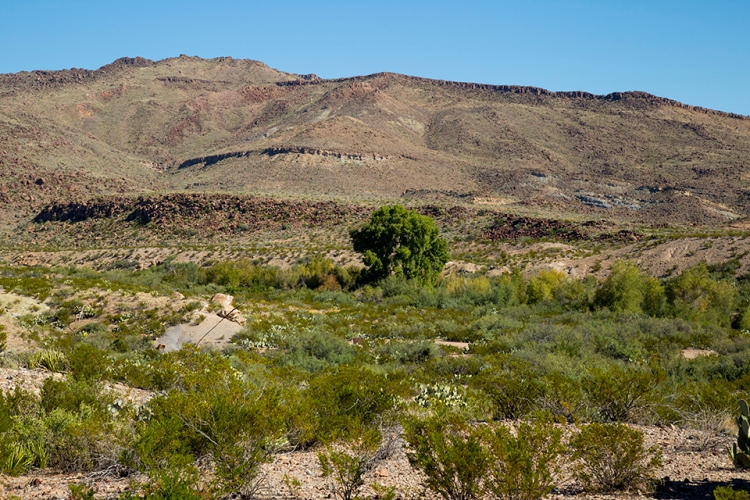 The little settlement of Glenn Springs contained a wax factory, producing  candelilla wax from the plant Candelilla, which grows naturally in the desert across Big Bend. The settlement also consisted of a store, and homes for the plant owner and the store and post office operator, and their families. Remaining are some corrals and other artifacts: 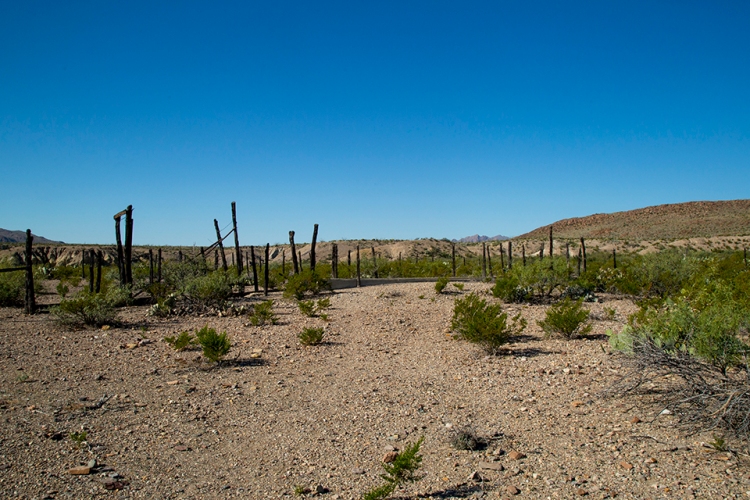 This is the remaining walkway and foundation of the Ellis home, the plant owner: 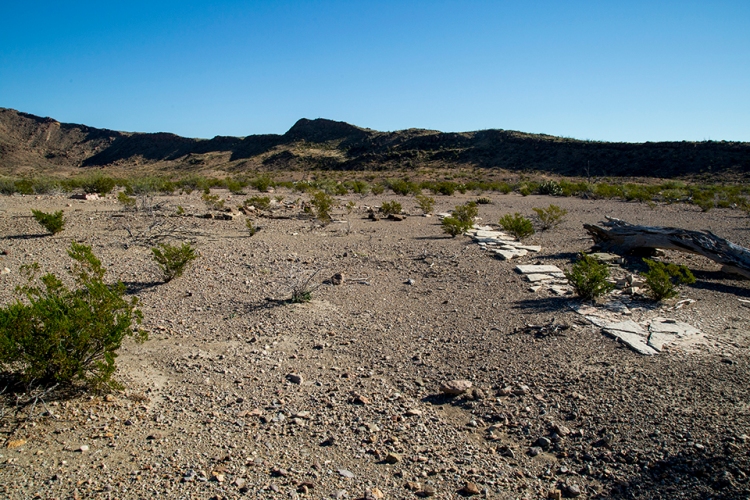 There were 9 soldiers of the 14th. Cavalry stationed here, and left are the remains of the “rifle pit,” as it’s described on archaeological maps of the settlement:

Across the draw created by the drainage of the spring was a segregated village of Mexican workers and their families, populated by about 60 Mexicans. Remains of several foundations of their houses can be found, as well as the Mexican cemetery which contains approximately 14 graves: 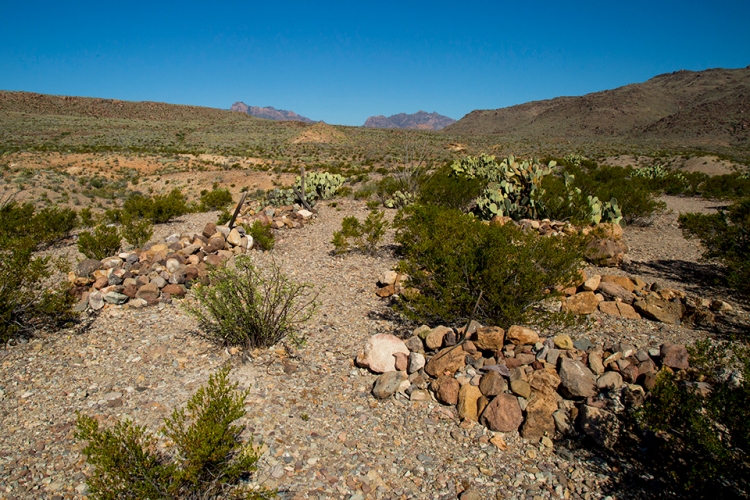 Glenn Springs existed from 1914 until about 1920. On May 5, 1916, a group of Mexican banditos, claiming allegiance to Pancho Villa, staged a deadly raid on Glenn Springs. Estimates vary from 50-several hundred men, but a sizable force attacked the village around 11:00 p.m. The 9 soldiers guarding the camp were sleeping in tents and fled to an adobe building, where they held off attackers for 3 hours, but finally fled and three were killed. The store owner, O.G. Compton, fled with his young daughter across the draw to place her in the care of one of the Mexican families. He returned to get his 9 year old son, but the boy had been shot and killed. A total of 4 people were killed and 4 others severely injured, the store looted and several buildings plus the wax factory were burned and destroyed. Glenn Springs was finally abandoned around 1920:

From Glenn Springs, we turn south on the Black Gap Road. Don’t let the term “road” confuse you…it’s a 4-wheel-drive trail, the most remote and difficult road in the park. After some fun and sometimes technical off-road driving for about 8 miles, we intersect the River Road, another 4-wheel-drive road that follows the course of the Rio Grande River. We stop for lunch at the Mariscal Mine, an abandoned cinnabar mine (quicksilver) that operated along the border from about 1900 until 1941:

Lunch alongside one of the abandoned mine buildings near the road:

Back at camp, we ready for our last night in Pine Canyon:

One final light show, starring Venus and the Milky Way: 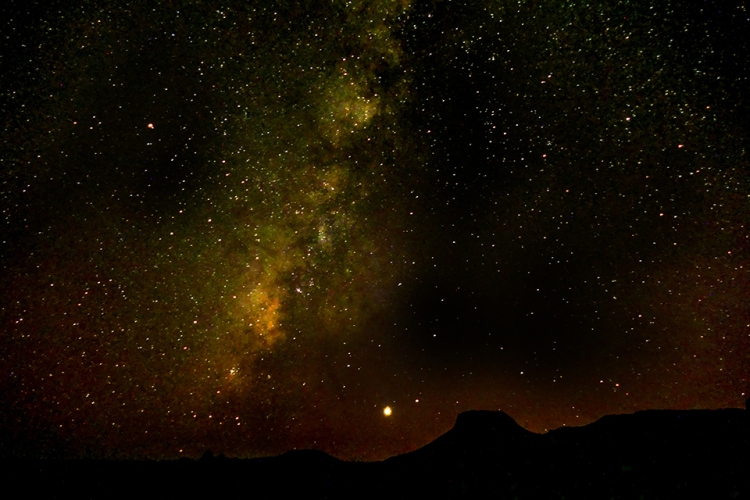 Sunrise over the Sierra del Carmen Mountains greets us as we get set to head home: