It’s been several years since I backpacked one of my most favorite trails in all of the Big Bend region, the Marufo Vega Trail, located at the far eastern end of Big Bend National Park on the southern border of Texas with Mexico.

This is a strenuous 14+ mile long trail that crosses the southern end of the Dead Horse Mountains, then drops down nearly a thousand feet to the Rio Grande River and traverses the slopes that drop down another hundred feet or more to the river, southward some two miles, then climbs the thousand feet back up to the Dead Horse Plateau.

The Marufo Vega Trail probably is the scene of more “search and rescue” events than any other in the national park, mostly due to its remoteness, the total lack of water, and the extreme heat in these canyons during late spring, summer and early fall. This is definitely a winter hike, and I cannot emphasize enough how important it is to carry at least a gallon of water per person for this hike.

The trailhead lies on the paved road to Boquillas Canyon. There is a dirt parking area across the road from the trailhead. The trail follows a dry creekbed up Telephone Canyon, passing some of the remains of old ore tram towers that carried ore buckets on large 1″ cables from the Rio Grande River to an ore terminal up-canyon, where the ore was loaded on wagons and hauled by mule to a processing plant in Marathon, TX, some 40 miles north of the current national park.

At 1.5 miles there is a trail junction where the Marufo Vega Trail turns right and climbs a steep gully of rocky scree, up to the Dead Horse Plateau. You can also continue on .7 mile up the Strawhouse Trail to the point where another trail junction marked “Marufo Vega” splits to the right and climbs out of the Strawhouse drainage up onto the plateau for another .7 mile to join the Marufo Vega Trail.

The trail flattens out and follows dry creek drainages, winding through the ravines and cliffs of the Dead Horse Mountains for another three miles.

Suddenly, as you round the corner of a bluff, the lower canyons of the Rio Grande River open out before you with startling grandeur.

At this point you are also struck by the fact that the trail has to descend down to that river so far below and traverse the slopes just above the river for 2 miles before you can climb out and up again.

The southeastern end of the Dead Horse Mountains collides head-on into the uplifting fault which is the Sierra del Carmen Mountains in Mexico. The Rio Grande River cuts a dividing swath between these two ranges. Here, a nearly full moon rises over the 8000′ high peaks of the Sierra del Carmens. It is here that the trail begins its descent of over 800 feet down to the Rio Grande, seen below as a green oasis at the bottom of the canyon: 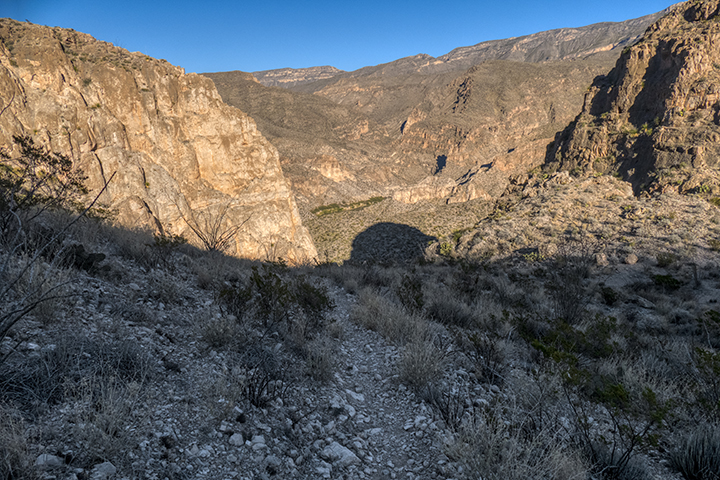 Another mile later, following the descent from the plateau, the trail skirts along the cliffs that drop another 150 feet or so down to the river: 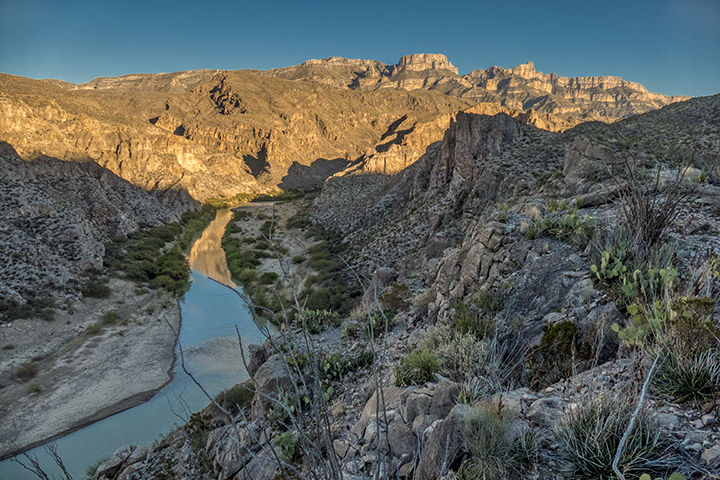 At this point I set up camp at one of the most scenic, and secluded, spots I’ve ever found in Big Bend National Park: 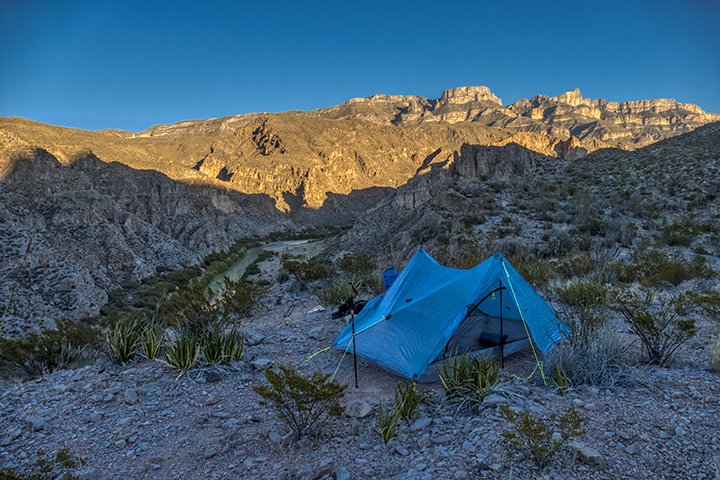 Down on a sandbar along the river a wild mustang, probably from Mexico, grazes on the lush vegetation that water provides: 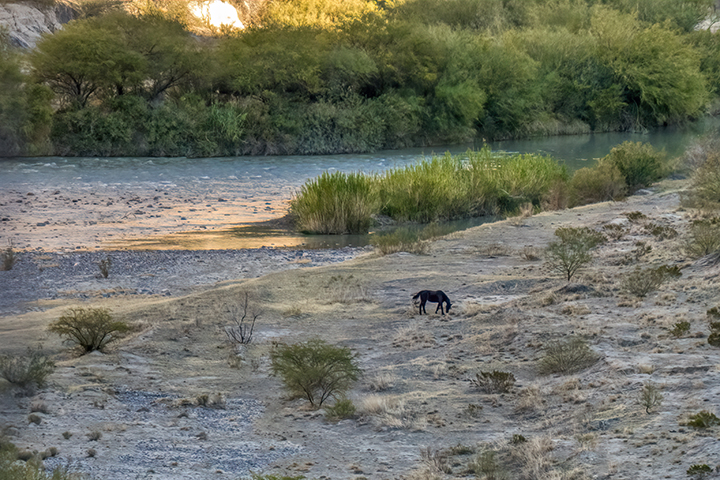 The cliffs that mark the end of the Dead Horse Mountains, and the plateau from which the trail descends: 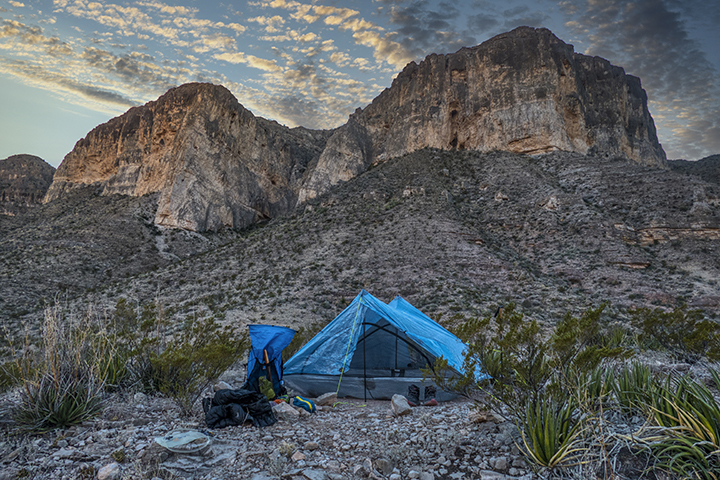 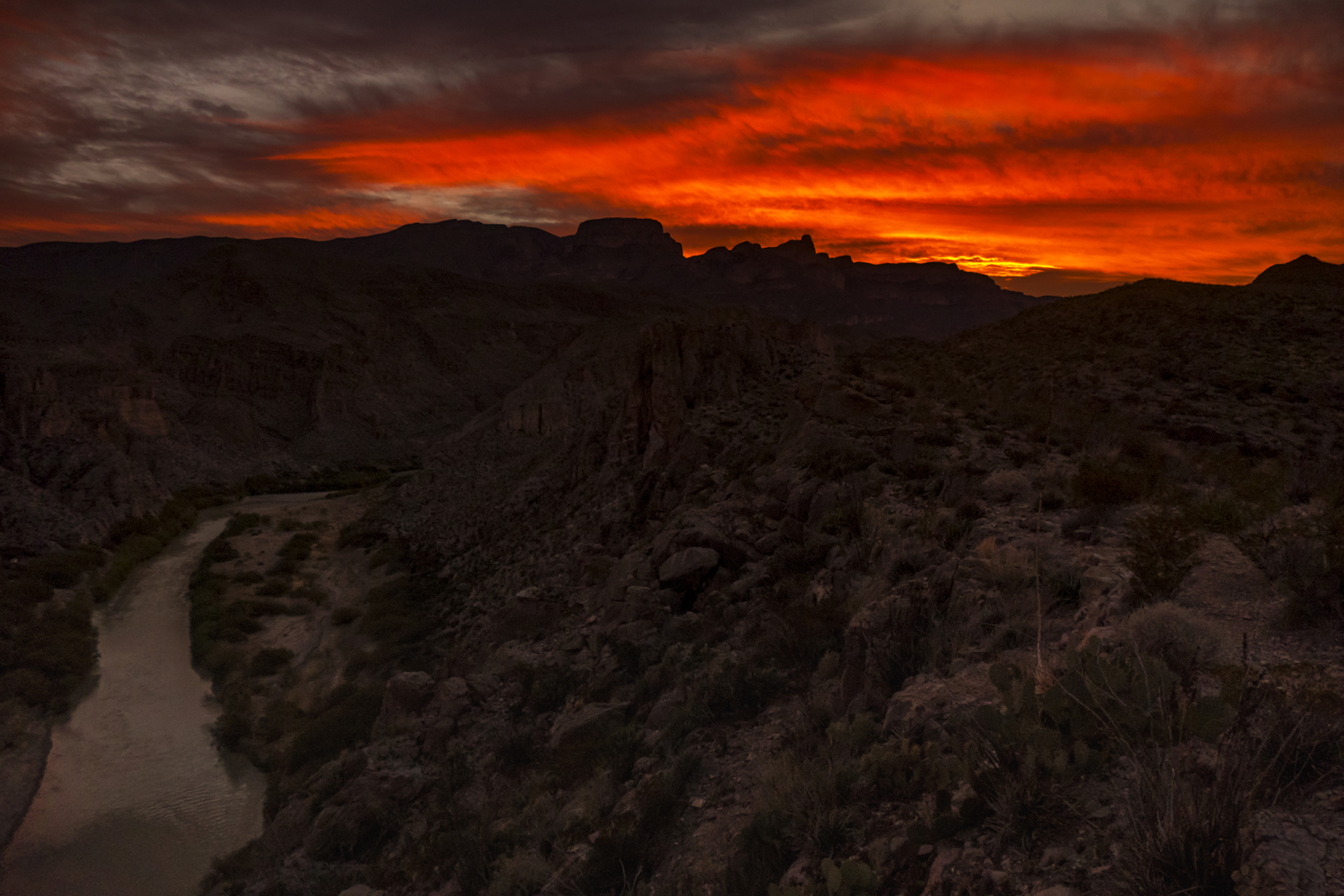 Exploring the side canyons requires a lot more time and days, which I will save for another trip:

The trail continues downriver with astonishing vistas everywhere you look. The extreme tilting of the fault line can be seen in the massive cliff face on the Mexican side of the river (the tan cliffs on the right):

Soon it’s time to begin the 1000′ climb back up through a side canyon, following the Marufo Vega Trail markers back to the top of the plateau:

A beautiful redtail hawk kept watch on me as I neared the top of the trail, then effortlessly sailed off his perch and was two canyons over before I had a chance to get a drink of water.

Overview of the 14.5 mile long Marufo Vega Trail. The light area of the map without map gradients is Mexico:

If you are fit, and in the national park in the winter when temps allow, this is not a trail to be missed. If you continue on up Strawhouse Canyon with a little more time, there is some beautiful native American rock art (pictographs) at the entrance to a box canyon at the end of that trail…but that’s for another trip.