This month my good friend and longtime hiking buddy Joe joined me to hike several sections of the 50-mile route through the state park. Since both these parks cover hundreds of thousands of acres of the Chihuahua Desert, our main concerns were finding water where very little exists, and route-finding through an area of desert where no established trails exist…two factors that have the potential for disaster for the unprepared. In fact, just the day before we started out on the first leg of the route, there had been a search-and-rescue event to save lost hikers on the same trail we were attempting.

From the trailhead, the route crests a ridge and descends 200′ down into a drainage of Leyva Creek, a dry creek bed that drains this section of the mountains: 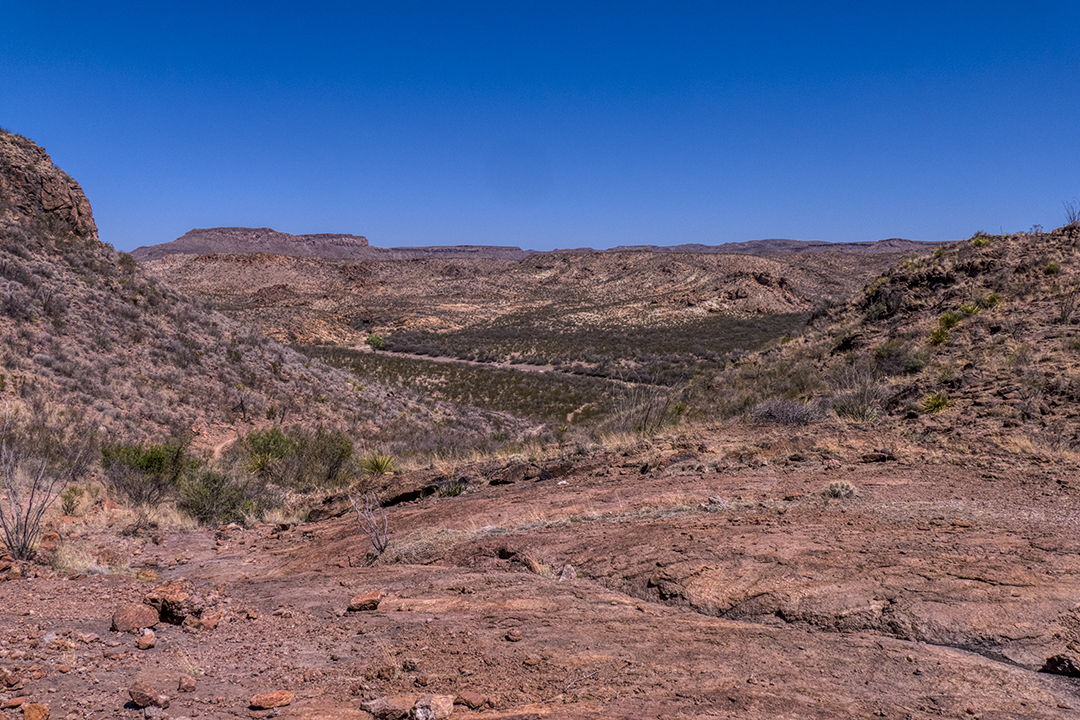 At about two miles, we find our first water, at a bedrock wall and pouroff across the creek:

A short distance down the creek e come upon another water feature, beautiful deep pools cut into the bedrock by years of flow:

Further along this “dry wash” we spot an igneous “dike,” formed by lava forced up into cracks and fissures in the earth which cools, then is exposed by eons of erosion, with more water pushed to the surface by the bedrock. The many prints in the sand are from longhorn cattle, deer, elk, javelina, desert bighorn sheep, aodad sheep, and the occasional bear or mountain lion: 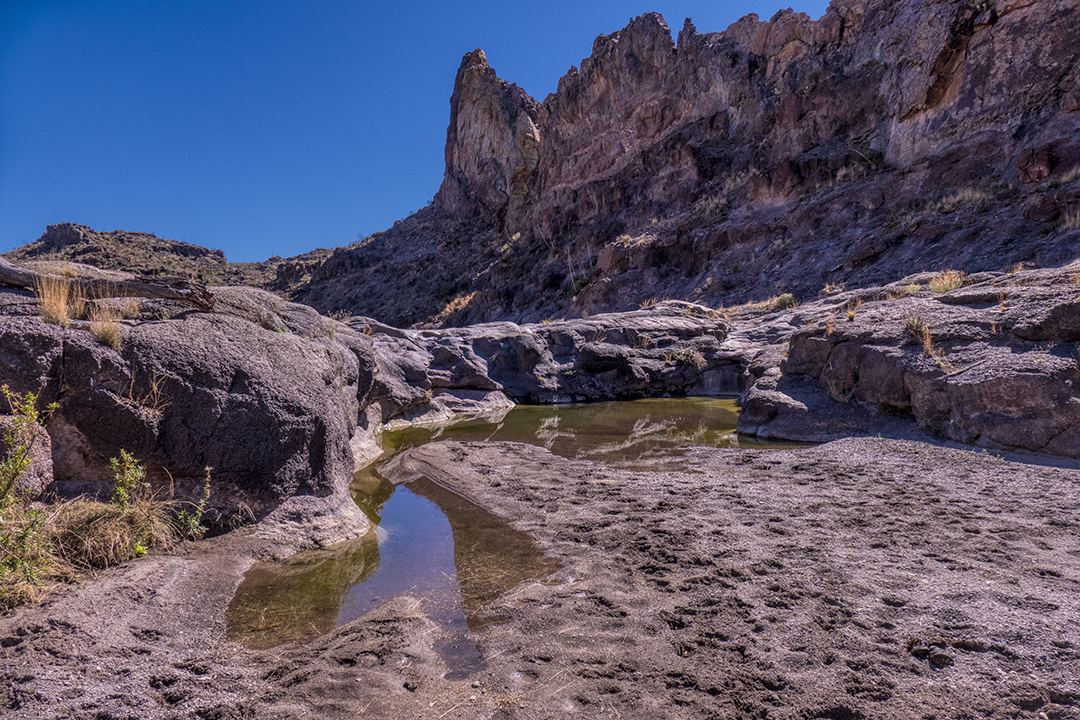 Our campsite the first night was at the base of a beautiful granite wall, complete with a stream of running water just out our front door: 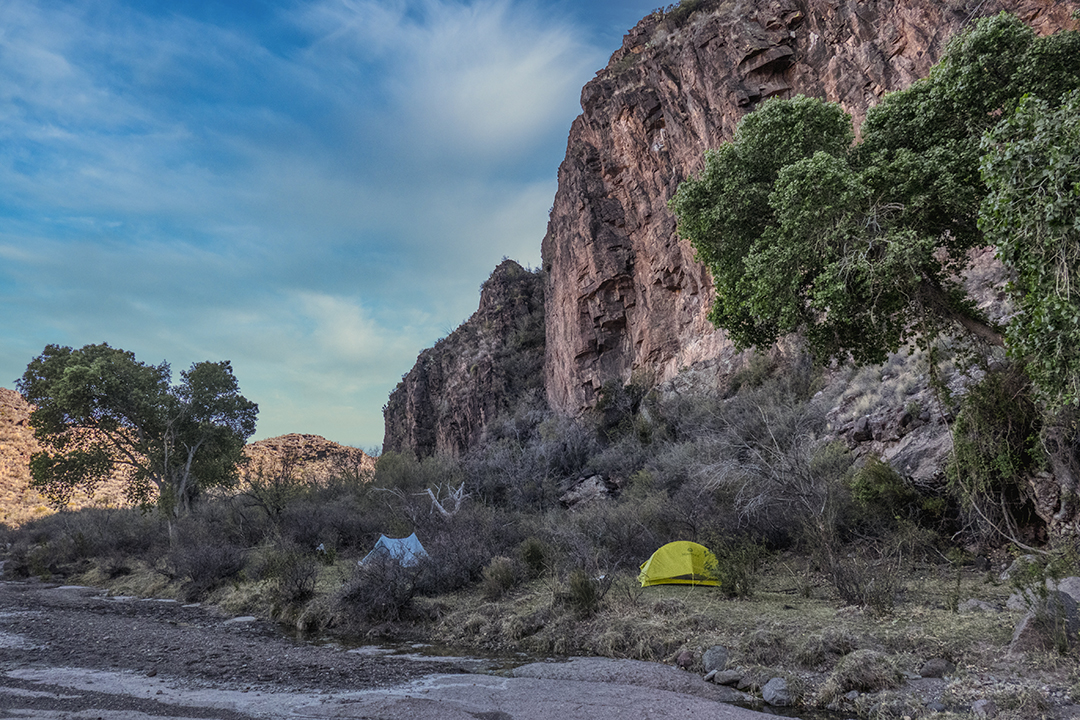 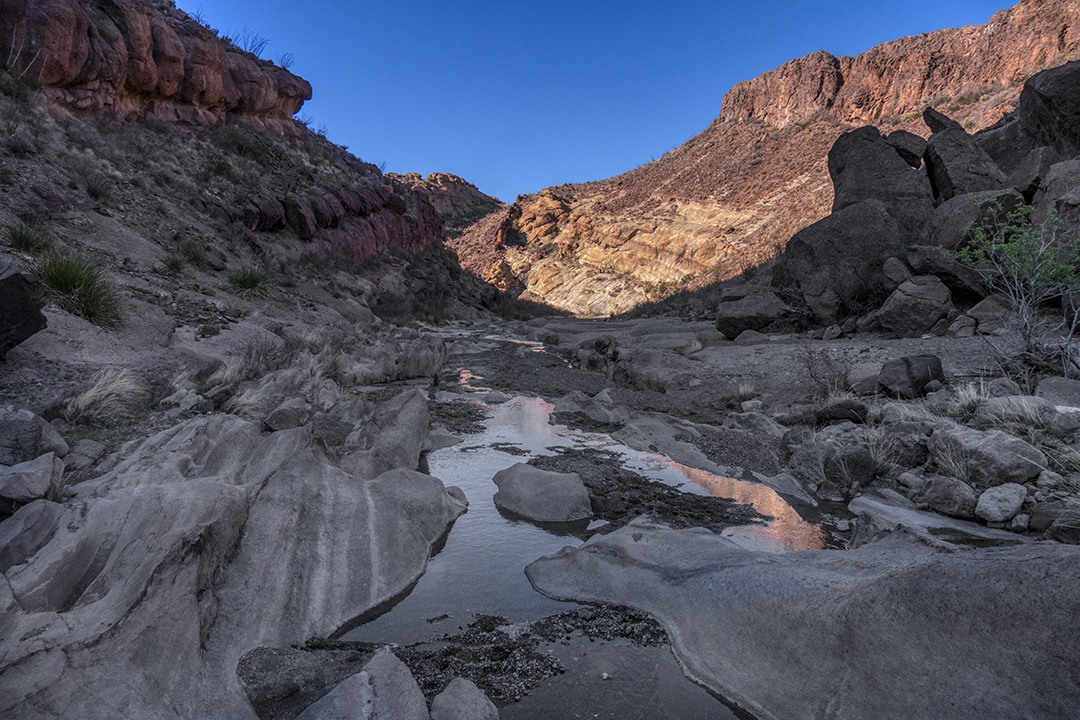 A short hike down canyon yields more water, not to mention fantastic views of the strata that makes up the interesting geology of this area: 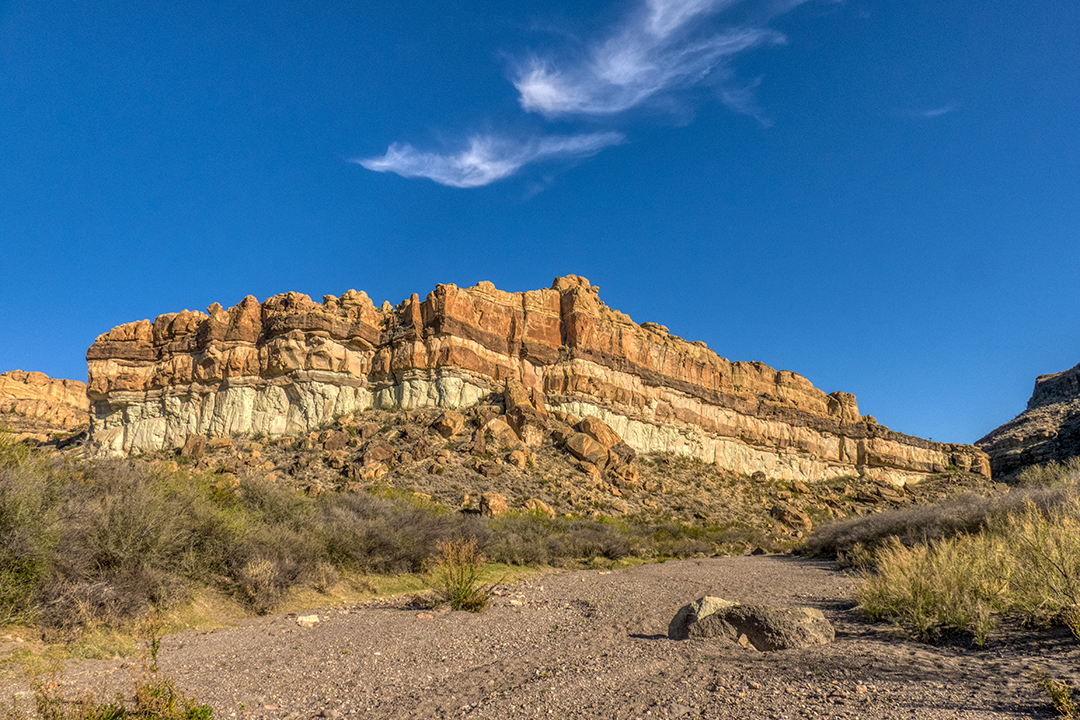 After a beautiful, clear, cool night filled with stars, satellites, constellations, a few meteors and the Milky Way, we awake to the clamoring of the hooves of a group (herd or flock, whichever you prefer) of aodad (barbary) sheep. These are non-domestics imported from Africa years ago for hunting by area ranches, and are now running wild across west Texas, competing for scant resources with native species, such as desert bighorn sheep:

We headed north from camp for a day hike to find the trail that follows Terneros Creek to its intersection with Leyva Creek. Along the way we came upon a small cave that had obvious prehistorical use by native people, near a livestock pen that probably dates to the middle of the last century. We found rock art at the entrance, and the ceiling of the cave was blackened by years of fires burning for warmth and cooking: 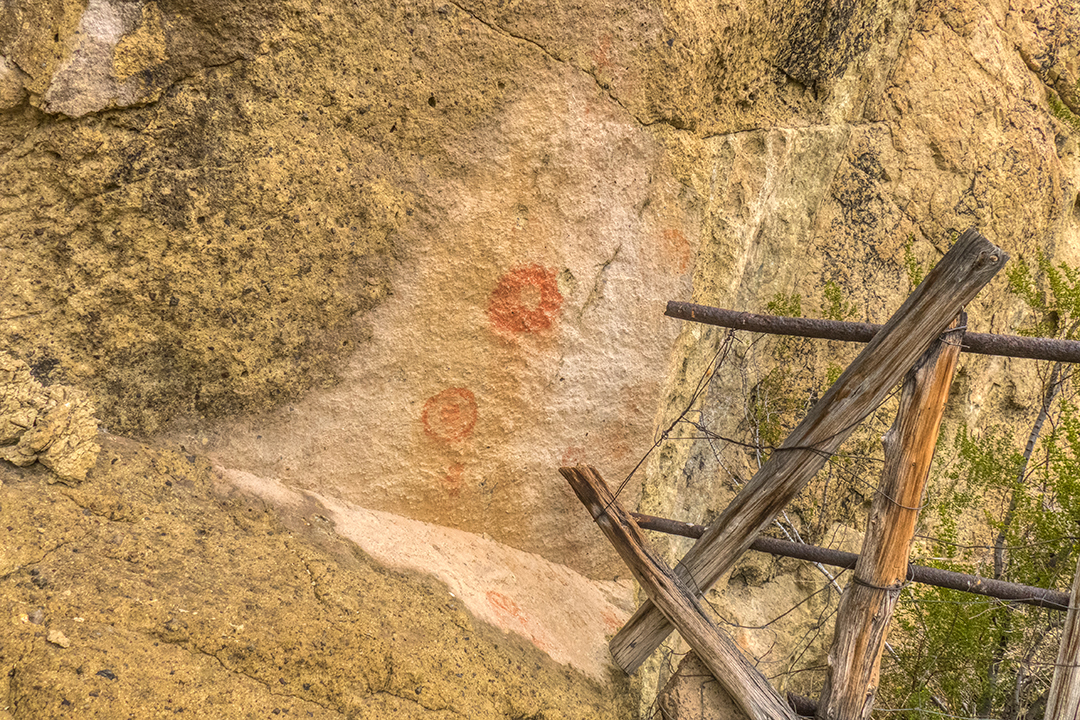 Instead of following the designated trail that follows an old ranch road due north, we diverted through a side canyon, an extension of Lava Canyon, that shows on our topo maps to contain water. In fact, it contained LOTS of water: 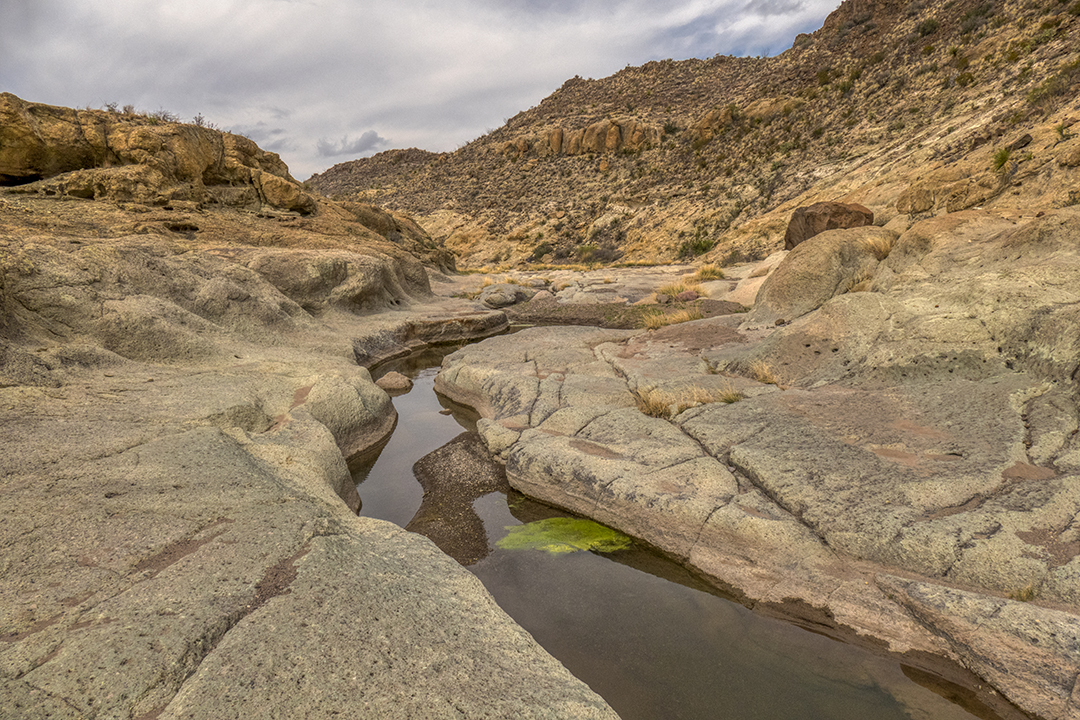 At the end of the canyon, it turns into a form of “slot canyon” before opening out into Terneros Creek: 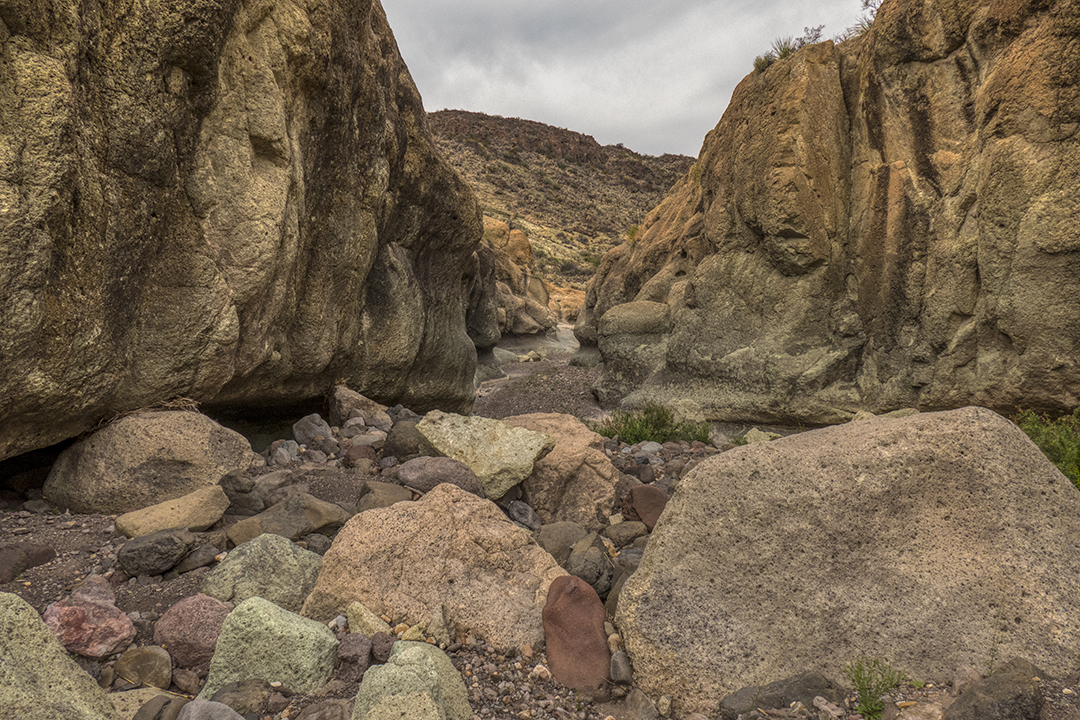 After returning to camp, the day hike ended with a cool night under the stars, and a 5.5 mile hike back to the trailhead on the third day. We passed many signs of spring in full bloom, such as these Big Bend Bluebonnets: 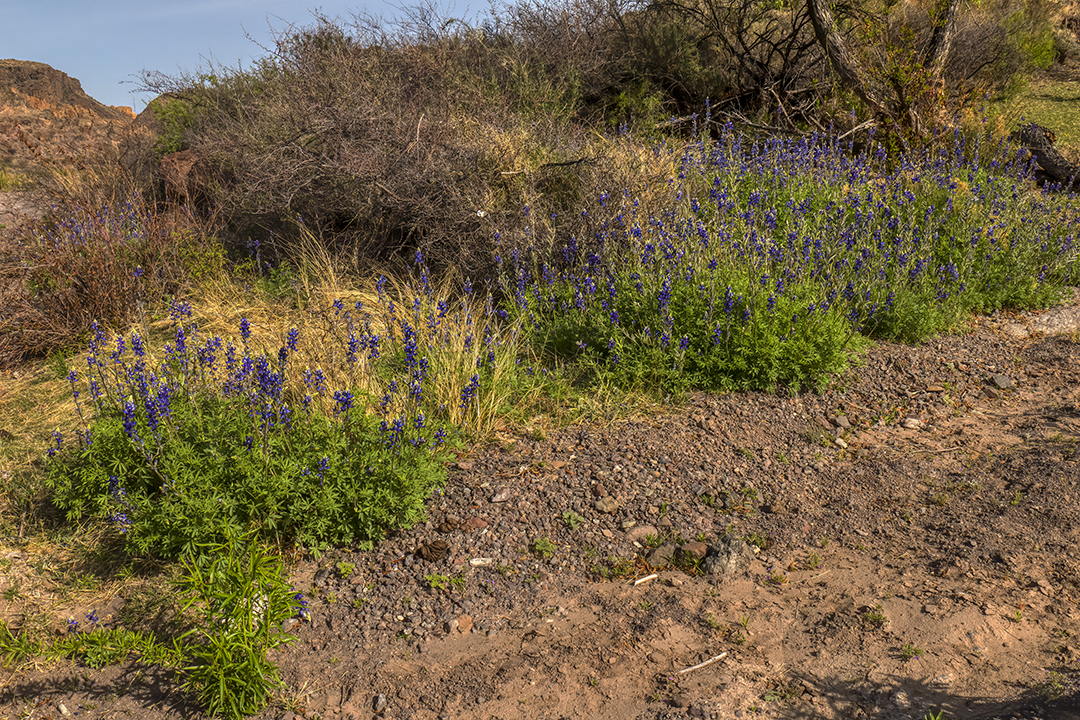 From the trailhead at Cinco Tinajas, the route passes the Sauceda Ranch House, now the location of the park interior headquarters, then follows the Leyva Loop ranch road to the Puerta Chilicote trailhead, and the start of the Mexicano Falls Trail which begins the second half of the route, and the remaining 25 miles of the Big Bend 100 through the state park. This section uses slightly more established trails, complete with cairns to aid in navigation:

Some of the flowering cactus along the trail includes rainbow cactus as well as claret cup cactus in bloom:

The trail follows cairns across solid rock until it drops down through a drainage to a spring indicated by telltale cottonwood trees:

At the bottom, a pouroff holds water in small tinajas, which can be filtered to replenish water supplies. This series of tinajas (spanish for “earthen jar”) features a large panel of rock art above a pool:

From here the trail climbs 200′ over a saddle and follows the trail of cairns to a spectacular overlook above Mexicano Falls. This is the second highest accessible waterfall in Texas, and unlike Madrid Falls (which I covered in the previous blog post), it is more intermittent in flow: 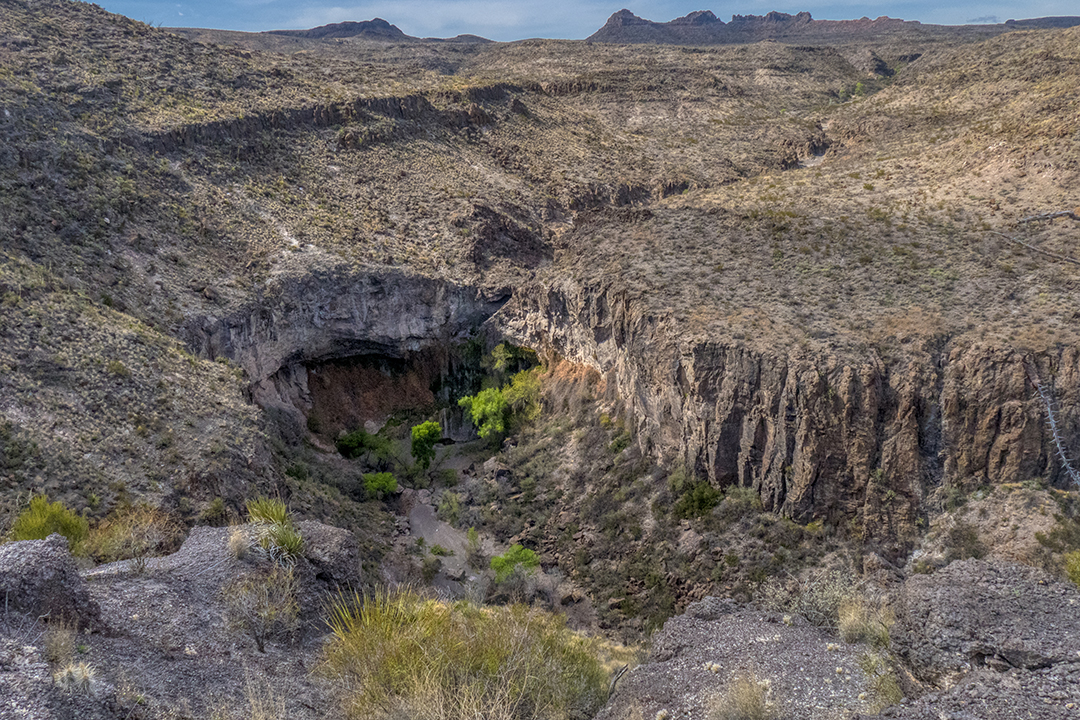 My campsite was on a high mesa just past Mexicano Falls, and I was treated to the warm glow of late light: 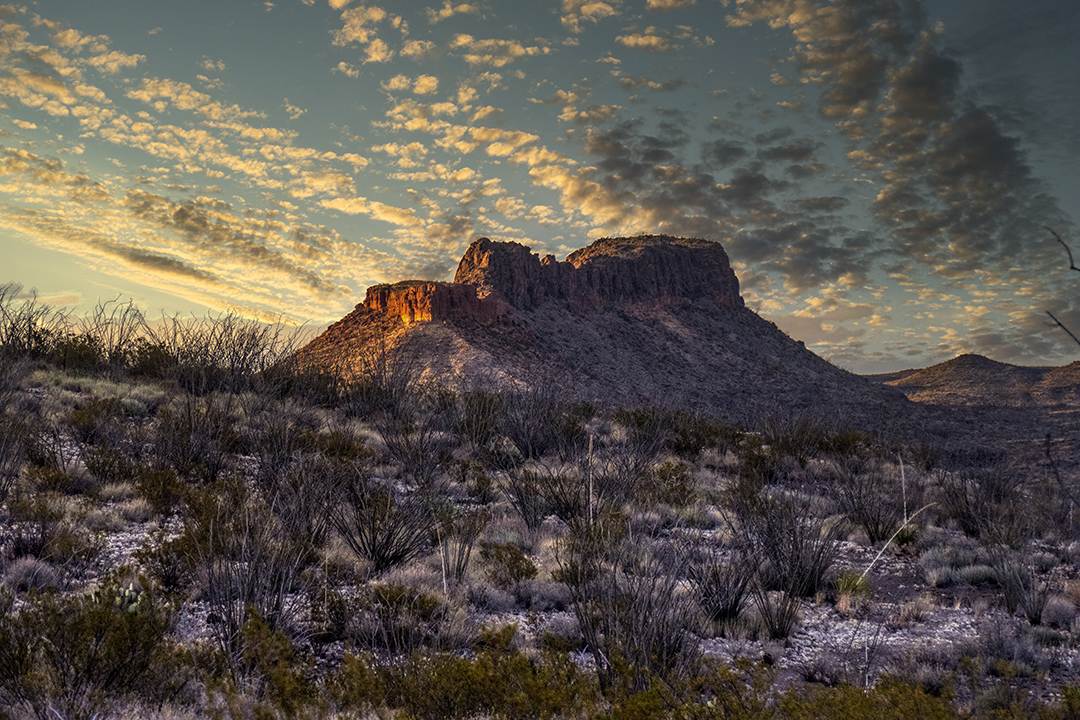 As if that wasn’t enough, the sunrise next morning was breathtaking:

The views down Arroyo Mexicano, with the “Flatirons” of the Solitario (a round “lacolith” left from the volcanic activity of ancient times) in the distance:

Moonrise over another adventure on the trail: 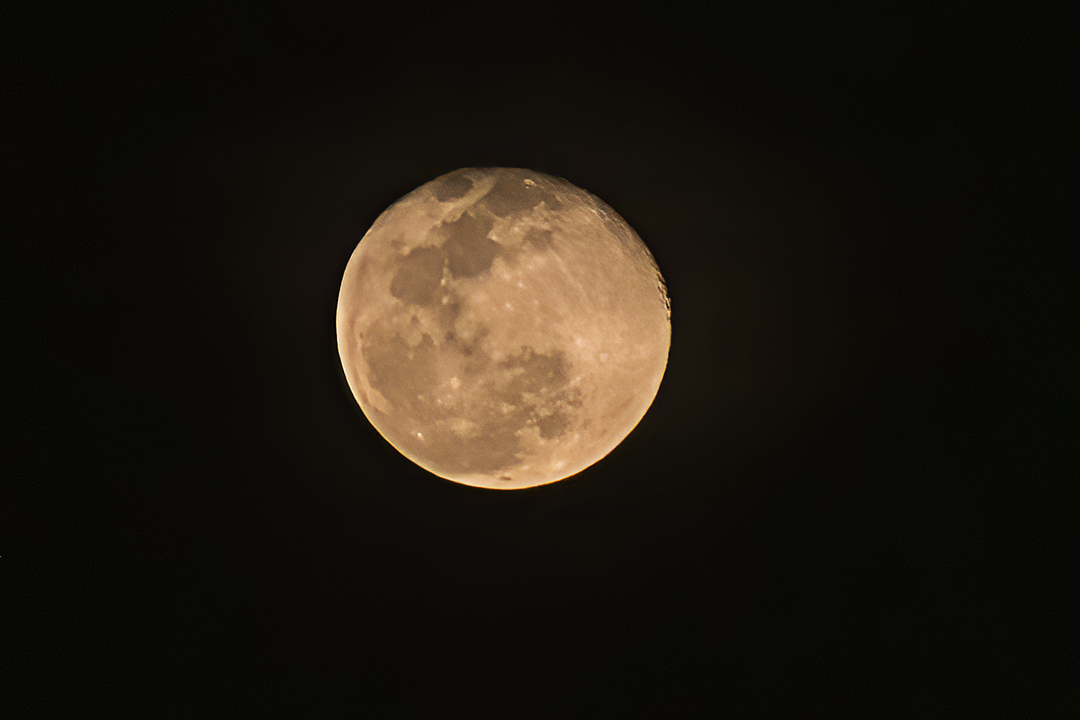 From Mexicano Falls, you can continue on southeast to the Mexicano Falls Trailhead, then down another half mile to Chorro Vista Camp, where you pick up Chorro Vista Trail which drops down to Madrid Falls. From Madrid Falls follow the Arroyo Primero Trail through Chorro Canyon, past the Madrid Ranch another mile and a half to Fresno Cascades, where you pick up the East Contrabando Trail which follows Fresno Creek for 11 miles to the end of the Big Bend 100 in Lajitas, at the East Contrabando Trailhead, all covered in previous posts.